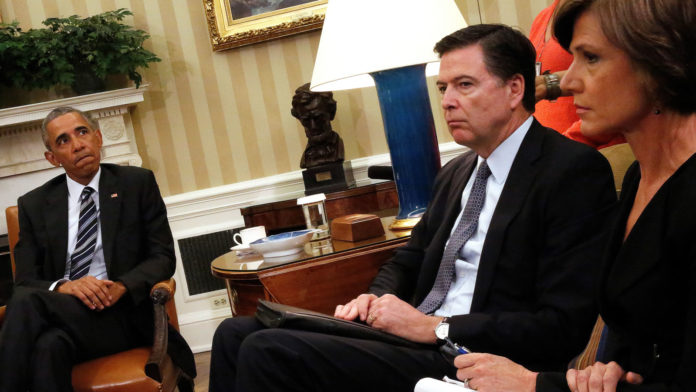 In recently unearthed text messages, FBI agents tasked to take down Donald Trump during and after the 2016 election by disgraced former Director James Comey were so concerned about potentially illegal behavior conducted by the agency, that they purchased liability insurance to protect themselves.

One agent sent a text message on January 10th, 2017 which stated: “[W]e all went and purchased professional liability insurance.” This was less than two weeks before President Trump was inaugurated.

“Holy crap. All the analysts too?” an agent responded.

“Yep,” the first agent said. “All the folks at the Agency as well.”

“[C]an I ask who are the most likely litigators? [A]s far as potentially suing y’all[?]” an agent responded.

“[H]aha, who knows….I think [t]he concern when we got it was that there was a big leak at DOJ and the NYT among others was going to do a piece,” the first agent replied.

The names of the agents are redacted in the documents provided, but the legal filing from Powell also states that they have received documents that included handwritten notes and texts from Peter Strzok, Andrew McCabe, Lisa Page, and FBI analysts who worked on the FBI’s investigation of Flynn.

The unnamed agents also discussed their fears of how Trump’s new attorney general may view the actions taken against the president.

“[T]he new AG might have some questions….then yada yada yada…we all get screwed,” one agent wrote.

Conveniently, as soon as Jeff Sessions was confirmed to be Trump‘s new attorney general, the media, Congressional Democrats, and Obama holdovers within the Department of Justice immediately pushed Sessions to recuse himself from overseeing the investigations against Trump.

The FBI agents also talked about how the leaders of the investigation were more concerned with conspiracy theories than with evidence.

“I’m tellying [sic] man, if this thing ever gets FOIA’d, there are going to be some tough questions asked. [A]nd a great deal of those will be related to Brian having a scope way outside the boundaries of logic,” one agent wrote.

“[REDACTED] is one of the worst offenders of the rabbit holes and conspiracy theories. This guy traveled with that guy, who put down 3rd guy as his visa sponsor. 3rd guy lives near a navy base, therefore…” an agent texted.

Multiple texts also show that the order to close the investigation of General Flynn, referred to as ‘Crossfire Razor’, came as early as November 8th, 2016, the day of the presidential election. The investigation was re-opened in early January 2017.

The disclosures made by the Department of Justice also show that the FBI used ‘national security letters’ (NSLs) to spy on Flynn’s finances. NSLs are never independently reviewed by courts, unlike subpoenas, which require a judicial review and approval before the agency is able to seize property or information.

In a text message, one agent noted that the NSLs were only being used as a pretext by leadership within the FBI to buy time so that they could find dirt on Flynn.

“[T]he decision to NSL finances for Razor bought him time,” one agent said almost two weeks after the initial order to close the Flynn case. It is not apparent who the agent was referring to in the message.

“[B]ingo. [S]o what’s an NSL going to do – no content,” another FBI agent responded.

“Hahah this is a nightmare,” an agent said.

“If we’re working to close down the cases, I’m not sure what NSL results would do to help,” one agent replied.

“[E]xactly that makes no sense,” an agent said.

These text messages also show that some agents thought the investigation was being run by officials within the FBI who were in the tank for Hillary Clinton.

“[D]oing all this election research – I think some of these guys want a [C]linton presidency,” one agent wrote on Aug. 11, shortly after the Crossfire Hurricane investigation against Trump began.

On the day of the infamous Oval Office meeting between Obama, Biden, Comey, Sally Yates, and Susan Rice, one agent admits that “Trump was right” when he tweeted that his briefings were being delayed by the FBI so they could search for more evidence against him.

The Federalist first reported last May that the Oval Office meeting was the key to understanding the investigation of Trump run by Obama’s FBI.

Screenshots and descriptions of further text messages can be found here.