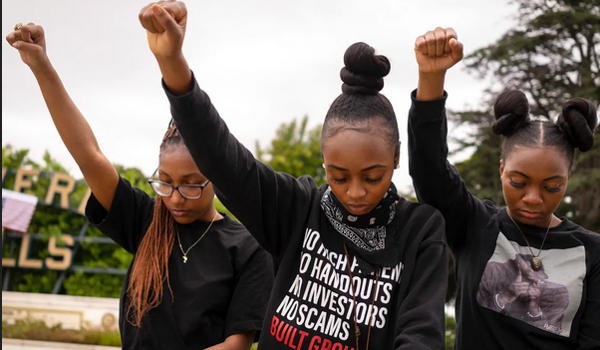 California is well on the way toward slavery reparations, it was announced. Liberals are hailing the release of an “exhaustive” 500-page report “detailing California’s role in perpetuating discrimination against African Americans” as a “watershed moment.” This, they say, is “a major step toward educating the public and setting the stage for an official government apology and case for financial restitution.”

The reparations report, released on June 1, goes into grueling detail laying out all the “harm” suffered by “descendants of enslaved people.”

Long after the Civil War, the damages continue, it claims. Through “discriminatory laws and actions in all facets of life, from housing and education to employment and the legal system.”

This is exactly what reparations advocate Justin Hansford has been aching to hear. The Howard University law professor almost wet himself with excitement. “To have an official detail of these histories coming from the state is important.” Monumental even.

“I know a lot of people say we don’t need to keep doing studies, but the reality is until it comes from some source that people think is objective, then it is going to be harder to convince everybody of some of the inequalities described.”

While in other states, parents and lawmakers oppose the agenda of psychological birth control through gender mis-identity and resist paying their fair share of White-Guilt reparations for the actions of their ancestors, California welcomes it all.

They might not be able to teach the 1619 Project propaganda as openly as they would like but they’re getting away with it quietly, on the sly.

Historian Adam Laats called his copy of the tome “remarkable in its unflinching account.” He was impressed by the author’s treatment of how “police officers and district attorneys in the Los Angeles of a century ago were members of or had ties to the Ku Klux Klan.” He acts like it proves every officer in LA today is just as racist.

It’s time to conveniently re-write the narrative of history, while forking over long awaited reparations cash. “Who children should learn are the main actors in the story of us as a nation has always been a real lightning rod.” Pluto used to be a planet, too.

Gavin the Nuisance was responsible for signing the legislation creating the task force, “making California the only state to move ahead with a study and plan.”

The Chicago suburb of Evanston, Illinois is ahead by a nose, though. Because they’re “the first city to make reparations available to Black residents last year.” According to Governor Newsom, “California was not a passive actor in perpetuating these harms.”

Newsom says there’s a parallel effort to delve into “California’s dark history of violence, mistreatment and neglect of Native Americans.” They might get a slice of the pie, too.

The African American reparations task force is expected to “release a comprehensive reparations plan next year.” They already worked out a deal where checks will be limited to “descendants of African Americans living in the U.S. in the 19th century.” That’s a huge blow to Black Lives Matter™ who “wanted to expand compensation to all Black people in the U.S.“