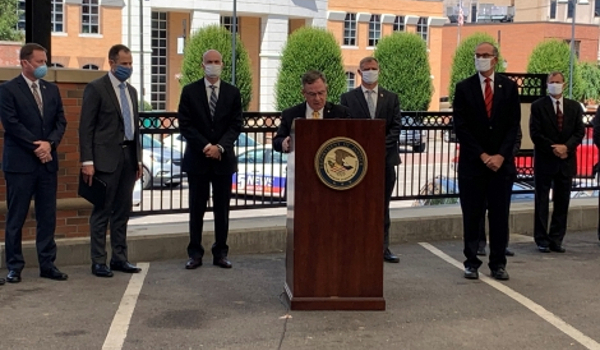 The Angel of Death haunting the corridors of the Louis A. Johnson VA Medical Center in rural Clarksburg, West Virginia, pleaded guilty to federal murder charges on Tuesday. The world now knows for sure that Reta Mays injected lethal doses of insulin into eight veterans, but we still don’t know why she did it.

Angel of death accepts her fate

According to U.S. Attorney Bill Powell, the motive of this “angel of death” is still unclear. Authorities didn’t receive a “satisfactory response” to questions they asked former nursing assistant Reta Mays about the “reasoning behind her actions.” In general, killers who work as medical caregivers murder for “money, for a sense of sadistic pleasure, for a belief that they are ‘easing’ the patient’s pain, or simply ‘because they can.'”

Prosecutors described for the court how 46-year-old Reta Mays injected eight veterans with lethal doses of insulin. As expected, the blood sugar levels of the unsuspecting patients dropped to “dangerously low levels.” Seven died shortly after the injection. The eighth, identified as R.R.P., was injected. His blood sugar stabilized but the 92-year-old died two weeks later. She wasn’t charged with that one because “the medical examiner was unable to tie his death to the insulin injection.”

The angel of death was charged with “seven counts of second-degree murder and one count of assault with intent to commit murder” and she’s facing life in federal prison. Her attorney refused to comment. Tony O’dell, the lawyer representing most of the families did have something to say. His clients are pleased “with the outcome” but don’t want to see it end there. “The VA hospital in Clarksburg had a frightening number of system failures that allowed this person to kill as many people as she did. The fact that the related deaths continued to pile up shows a complete lack of competence and a total lack of human caring.”

Honoring the memories of the victims

At a press conference announcing the guilty plea, federal prosecutor Bill Powell expressed condolences to the families, saying that the government hopes “that the work of these agents and prosecutors honored the memory of your loved ones in a way that they so justly deserved and, in some small fashion, assuage the anguish you have suffered.” The investigation took a full two years from when the suspicious deaths of 10 veterans were first reported.

All of Mays’ victims were “elderly veterans staying in the hospital’s surgical unit known as Ward 3A.” That’s where Ms. Mays was working on the night shift since she had been hired as a nursing assistant five years before. Her duties included “acting as a one-on-one sitter for patients,” but she had no authority to give medication.

The biggest outrage to all involved is the blatant incompetence from the hospital to the VA Inspector General. Hospital staff didn’t have a clue as eight patients were suspiciously murdered right under their noses. Insulin, known to be fatal when administered improperly, was left carelessly lying around unaccounted for. There wasn’t a single surveillance camera around.

An alert doctor finally noticed the bodies piling up in the surgical ward and blew the whistle to the board of supervisors in June of 2018. By then, eight people had died suspiciously and most had been embalmed and buried except one who was cremated. Valuable evidence had already been destroyed. She was fired in July but not prosecuted until earlier this year.

Appearing in front of the judge in the courtroom, Reta Mays was shaking visibly. Her responses were a meek “Yes, sir” when asked if the angel of death understood the plea she was accepting. As related by the prosecutor, “Mays denied wrongdoing until recently when she realized the mounting evidence against her.”