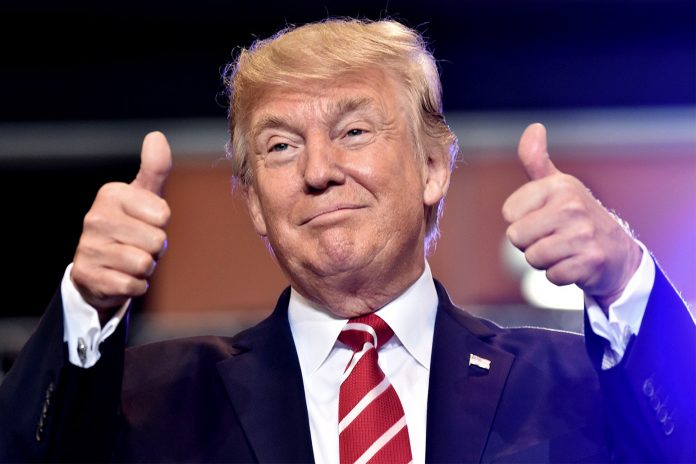 The Democrats and their mainstream media allies are scrambling to keep up their false narrative that Donald Trump pressured the Georgia secretary of state’s office to “find the fraud” necessary to overturn the election results in the state.

The media and the left have been insisting that Donald Trump was not interested in the truth of the presidential election, that instead he just wanted to overturn the results so he could win. One piece of evidence that they used to push this narrative was an anonymously sourced story about a phone call between Trump and the chief investigator of the Georgia secretary of state’s office.

Citing these anonymous sources, the mainstream media reported that Trump told the chief investigator, Frances Watson, to “find the fraud” and said that she would be a “national hero” for doing so.

After an audio recording of that call, found in the trash folder on Watson’s device as the result of an open records request, was made public, it is now obvious that the anonymous sources were wrong. The two quotes published by the mainstream media were not heard at any point in the phone call.

The Washington Post, the first news outlet to publish the original story containing the fraudulent quotes, was forced to issue a correction to their reporting, writing:

Correction: Two months after publication of this story, the Georgia secretary of state released an audio recording of President Donald Trump’s December phone call with the state’s top elections investigator. The recording revealed that The Post misquoted Trump’s comments on the call, based on information provided by a source. Trump did not tell the investigator to “find the fraud” or say she would be “a national hero” if she did so. Instead, Trump urged the investigator to scrutinize ballots in Fulton County, Ga., asserting she would find “dishonesty” there. He also told her that she had “the most important job in the country right now.” A story about the recording can be found here. The headline and text of this story have been corrected to remove quotes misattributed to Trump.

It’s now apparent that the reporting on the supposed quotes from President Trump was a game of telephone. Political commentator Tim Pool noted this in a recent tweet, writing:

“Someone was on the phone with Trump

That person then told a staffer

The staffer then told WaPo

Someone was on the phone with Trump

That person then told a staffer

The staffer then told WaPo

Clearly, the Washington Post did not actually confirm that Trump made these statements, and instead relied on a story relayed by a third party.

It has since been confirmed that the source of the fake quotes was Georgia Deputy Secretary of State Jordan Fuchs. Tim Pool, in a sarcastic tweet, pointed out the possible motives behind this lie:

“Jordan Fuchs is a hero

Because Democrats are morally superior, anything they do is justified in stopping those who are pure evil[.]”

Jordan Fuchs is a hero

Because Democrats are morally superior, anything they do is justified in stopping those who are pure evil https://t.co/Px8GaBXplg

Note: Pool’s tweet incorrectly refers to Jordan Fuchs as “he.” Fuchs is actually the woman in the picture.

As Tim Pool often points out, today’s media lacks journalistic ethics. Before the media became so corrupted, it was common to require several sources to verify a story. Today, they only need one anonymous source to write a hit piece.

Donald Trump responded to his vindication in a statement on March 15, thanking the Post for issuing a correction, and criticizing the media for publishing biased hit pieces against conservatives.

“You will notice that establishment media errors, omissions, mistakes, and outright lies always slant one way — against me and against Republicans. Meanwhile, stories that hurt Democrats or undermine their narratives are buried, ignored, or delayed until they can do the least harm — for example, after an election is over,” Trump said.

“Look no further than the negative coverage of the vaccine that preceded the election and the overdue celebration of the vaccine once the election had concluded,” he continued. “A strong democracy requires a fair and honest press. This latest media travesty underscores that legacy media outlets should be regarded as political entities — not journalistic enterprises. In any event, I thank the Washington Post for the correction.”

Donald Trump is right. When reporting by the mainstream media is found to be lies, it is almost always a story that is unfavorable to conservatives. The media often uses anonymous sources in order to push the left-wing narrative, but refuses to report stories from verified sources that are negative about Democrats, such as the numerous stories about Hunter Biden. Finally, they are being forced to admit to their mistakes. Hopefully one day the American people will realize that the mainstream media is a joke.