A new tip about his previous movements adds more details while raising more questions. Then, there’s the strange note he left for his parents. The latest in the search for fugitive Brian Laundrie has a special dive team plunging into the swamp. Just because his parents said that’s where he told them he was going doesn’t mean he’s there. The suspected killer could be anywhere but the possible trail cam sighting in Alabama has been ruled a false alarm.

Investigators aren’t saying a whole lot about the special dive team that set up shop in Florida’s Carlton Reserve on Wednesday but the suspected movements of the elusive and fidgety fugitive suggest the need for their expertise. They brought a large van and a boat out from the Sheriff’s Office in Sarasota County to comb the “swampy 25,000-acre reserve in Venice, Florida.”

The Sheriff’s Underwater Recovery Force is a team of 10 “highly trained underwater specialists” who get called in “to search for evidence of crimes and victims of drowning, water accidents and foul play.”

Just because they called in divers doesn’t mean they found something to recover. According to North Port Police, this latest development “does not mean anything has been found. It’s a part of the overall search process.” Spokesperson Kaitlyn Perez explains these “divers are specifically trained and very talented in low visibility bodies of water.”

If Laundrie left tracks of his movements, they will find them. “They dive down where you and I can’t see anything at all. They utilize technology and other special equipment to help them get down deep into really deep bodies of water, so they’re out there right now to recover whatever it is that they might find.”

Police are still trying to track his movements from the point they interviewed the couple in Moab, Utah, to wherever Brian is hiding now.

Their summer of travel ended in the murder of 22-year-old Gabby Petito, most likely at the hands of her supposedly future husband. Their extended road trip in a white Ford Transit van was meant to be the adventure of a lifetime.

She dropped out of communication near the end of August. Messages trickled out to her family but they seemed odd and contrived. Laundrie’s movements after being interviewed by police in Utah are highly suspicious. He showed up at the family home in Florida on September 1, without Petito but with her van. The girl’s family didn’t report her missing until ten days later.

He had a lawyer by the time police showed up to question him. After declining to say a word, he ran. His parents gave him a three day head start before telling police he was missing.

They also showed police the note he left on his mustang. Rather than disturb the note, the cops towed the car with it still attached. 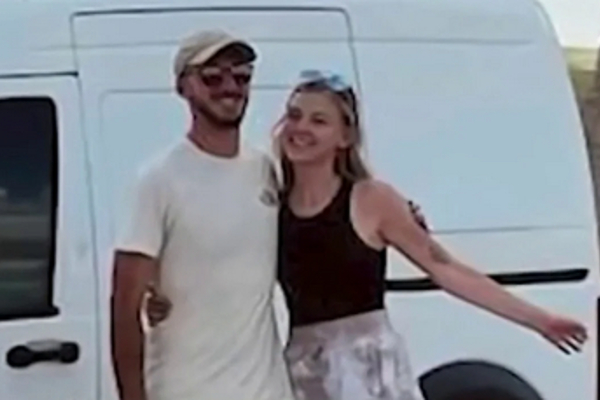 All that’s known about the note is Brian asked his folks “for the car to be removed — but the family left the vehicle there until Thursday, hoping he’d return to it.” The connection to his movements is unclear but he most certainly hasn’t returned.

The remains found in Wyoming’s Bridger-Teton National Forest were confirmed to be those of Petito by the coroner who also verified the cause of death was murder. He didn’t say exactly how though. The couple had posted all their movements up until August 27. Witness Miranda Baker has since come forward to relate “she and her boyfriend gave Laundrie a ride on August 29 in Wyoming.” He claimed to be “camping by himself for multiple days while Petito was back at their van.” Before he got in the car he offered $200. He thought they were going to Jackson. When he found out no, Jackson Hole, he bailed.

Laundrie “got agitated, asked that the vehicle stop, and got out near the Jackson Dam.” What they didn’t know was that other witnesses “claim they were at a restaurant in Jackson Hole, Wyoming, when they saw Gabby Petito and Brian Laundrie dining. The couple said they saw Mr Laundrie arguing with waitstaff, and that he appeared ‘aggressive.'”