The left is once again fawning over images of the Obama family, while the rest of us quietly try not to gag at the sight of Barack in swim trunks. But the most disturbing part didn’t involve the former president.

Despite what the left may say, no one actually wants to see 60 year old Obama shirtless. The former president and his family were caught on camera during their annual Christmas trip in Hawaii, and, as per usual, the left-wing media is just gushing over the family photos.

“Sadly, their mom, former First Lady Michelle Obama, was nowhere to be seen,” wrote Hollywood Life, though most of us are relieved.

The most disturbing part of this family outing is that Sasha Obama, 20, Barack’s youngest daughter, felt that it was completely appropriate to wear a tiny red thong bikini in front of her father. Or, is it more disturbing that her father allowed her to wear it in front of him, or in public, at all?

Barack’s other daughter, Malia, 23, seemed to dress more sensibly, wearing a pink bathing suit while joining her sister paddle boarding in the ocean.

Regardless, the paparazzi seemed more concerned with photographing the former president than they were with his daughters, taking dozens of pictures of shirtless Barack enjoying the sun to entertain the left, who is still obsessed with him to this day.

The images are going viral across social media, with mostly middle-aged leftist women swooning over the former president. 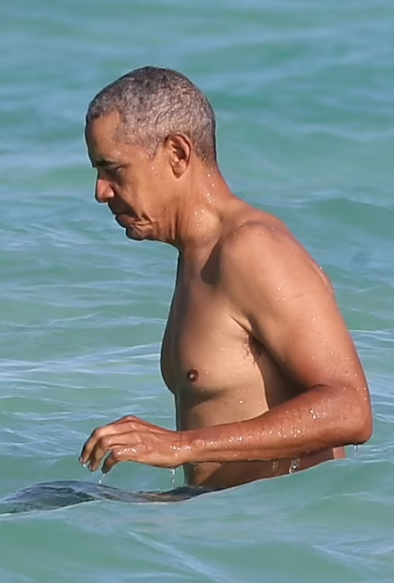