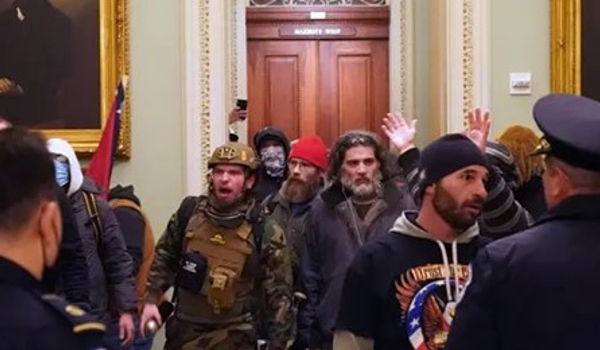 A flood of patriots came down on Washington D.C. and they aren’t just at the gates, they’re through them. Capitol police thought it was a joke until we got inside and then guns came out, one patriot declared. Braving flash bangs and tear gas a group of patriots tossed aside barricades and stormed the Capitol Building Wednesday.

A flood of patriots

At least 250,000 constitution supporting patriots invaded Washington to protest the certification of fraudulent Electoral College votes. They stormed capitol hill. There was a brief standoff outside the House Chamber but soon patriots were taking selfies inside the chamber and reading Nancy Pelosi’s email.

The day began with a fiery speech by President Donald Trump. There was an armed standoff with capitol police pointing their weapons at patriots who shattered a glass door. One patriot told PBS he was there when they tore aside the barricades.

There were flash bangs going off which they ducked and rushed into the building. That’s when police opened fire. The young man reported that his compatriot was shot in the neck.

He also noted it could have been him if she hadn’t been in front. The victim reportedly said she was alright then acted strange with blood coming out of her mouth. Her condition was unknown but there are reports she was removed on a stretcher. The victim later succumbed to her fatal injury.

Video on twitter and other images show patriots roaming through the chamber and congressional offices. Reports are just now trickling in that a bomb was located and safely detonated by the bomb squad. PBS just switched to coverage from inside the chamber showing patriots ranting from the gallery.

The Senate chamber was breached prompting Nancy Pelosi to call in the National Guard. Reinforcements are on the way from Virginia. Reports suggest “several people got on to a scaffolding outside Senate, took it to second floor, which looked like the area where McConnell’s office is located, and started banging on windows.”

There are reports that police are about to use live rounds against protesters and coverage is getting interrupted. Stay tuned for updates.