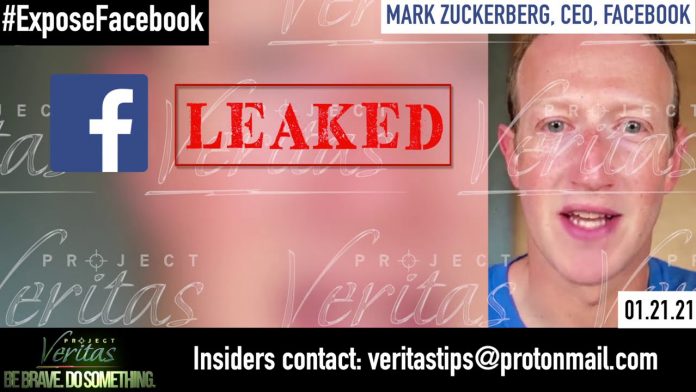 James O’Keefe, the founder of Project Veritas, tweeted about the new information. He included a quote from Mark Zuckerberg, which read: “This is a very difficult moment for a lot of us here, and especially our black colleagues. It was troubling to see how people in this [Capitol] mob were treated compared to the stark contrast we saw during [BLM] protests earlier this [past] year.”

Zuck: “This is a very difficult moment for a lot of us here, and especially our black colleagues. It was troubling to see how people in this [Capitol] mob were treated compared to the stark contrast we saw during [BLM] protests earlier this [past] year.” pic.twitter.com/KNd0BU7biP

According to its website, “Project Veritas investigates and exposes corruption, dishonesty, self-dealing, waste, fraud, and other misconduct in both public and private institutions to achieve a more ethical and transparent society.”

It is amazing that Mark Zuckerberg, the left-wing media, and Democrats in general continue to claim that the rioters at the Capitol, who are being investigated and charged with serious crimes, were treated better than left-wing rioters.

Throughout 2020, left-wing activists from groups like Antifa and Black Lives Matter violently attacked innocent people and police officers, burned down hundreds of businesses, and vandalized hundreds more. The death toll for these riots has been reported as nearly thirty people. Yet, most of them were set free by prosecutors in left-wing areas. There were no large-scale investigations and harsh charges for these rioters, unlike those at the Capitol.

One major example of a left-wing riot much worse than the storming of the Capitol was the “Capitol Hill Autonomous Zone (CHAZ)” established in Seattle by BLM activists and Antifa, which created a lawless zone where violence was abundant.

As Breitbart reports, “Unlike DC’s hours-long capitol riot, which the government saw fit to respond to with the deployment of 20,000 national guardsmen to the area, officials allowed the lawless CHAZ to exist for nearly a month. As a result, a 16-year-old lost his life -— reportedly murdered by CHAZ’s homemade ‘security forces.’”

The left-wing riots that took place over the summer of 2020 were reportedly the most costly riots in U.S. history. Not counting uninsured businesses, the property damage alone cost nearly $2 billion. Just in St. Paul, Minnesota, more than 170 businesses were looted or destroyed.

Of course, none of this information will ever be reported fairly by the mainstream media, and leftists like Mark Zuckerberg will never admit that these double standards exist. Instead, they will focus on the small number of right-leaning individuals who stormed the Capitol building on January 6, using them to vilify Trump supporters and the entire conservative movement.

Scientist Says Omicron Looks Like Something Vaccinologist Would Design on Purpose

Antifa Begins to Eat Their Own as More Details Emerge