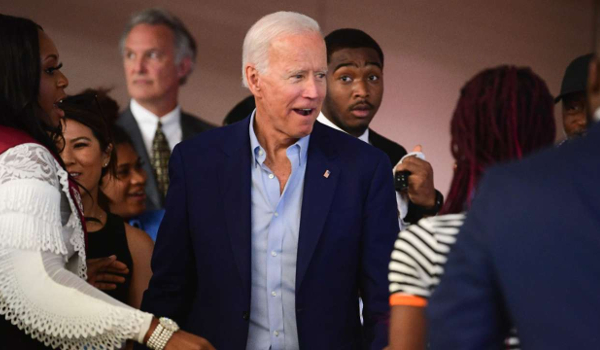 Holy Sh*t Batman! Joe Biden was backed by the same spyware company that “breached the privacy” of 1,400 political leaders, diplomats and reporters. Everyone knows that political donation money always comes with strings attached. Here’s another one of those deep, dark, rabbit holes just begging for further investigation.

Now that Imperial Leader Biden has been installed in the White House according to the New World Order plan, nobody seems to mind that his political machine has been well greased by a whole lot of money donated by a spooky cyber-warfare company. Donald Trump wasn’t just defeated in 2020, he was crushed.

The Constitution is a thing of the past. Democrats are in control and nobody is allowed to even question how they got there. Now that the figurehead leader of the nationalist movement is out of the way, it’s time to go after all the deplorable conservatives who elected him in 2016. For some strange reason, the letter “Q” keeps popping up.

The turning point in the war to save the Constitution and American way of life came on January 6, 2021, when barbarians impersonating Trump Supporters invaded the U.S. Capitol Building right on “Q.” For years, some have been speculating that “Q” or “Q-Anon” was a clandestine operation run secretly by the Federal Bureau of Instigation.

Their job seems to be finding unstable right-wing radicals in social media networks, then introducing them to each other and grooming them into committing crimes, on “cue.” Billions of dollars worth of taxpayer money has been allegedly spent entrapping Americans who otherwise would have done nothing more than rant on social media.

In the months leading up to November’s selection, the Biden campaign, FARA filings show, “took money from lobbyist John Gallagher who represents the company Q Cyber Technologies, which is also known as NSO Group.” For those not familiar with the zoo of alphabet intelligence agencies and cyber-spies, “NSO Group deployed Pegasus spyware back in 2019, which breached the privacy of 1,400 users on WhatsApp.”

They weren’t targeting just any WhatsApp accounts. They were after “political leaders, diplomats and reporters.” NSO group is in the business of selling spy tools to governments. They don’t seem to be real picky about checking credentials though. The code they wrote and sold “allowed attackers to inject commercial spyware on to phones simply by ringing the number of a target’s device.”

When National Security Agency whistleblower Edward Snowden talks, everyone listens. He may be a traitor but the beans he spilled benefit everyone, which counts for something. He does not like NSO.

“The NSO Group in today’s world, based on the evidence we have, they are the worst of the worst in selling these burglary tools that are being actively, currently used to violate the human rights of dissidents, opposition figures, activists.” For the right money, they sell their spyware to “some pretty bad players.”

The same critics who screamed bloody murder over the use of government grade spy tools on the American public are quick to point out this time that “NSO’s donations to Biden may encourage more illegal surveillance and violations of human rights going forward.”

All that money NSO Group / Q Cyber Technologies raked in selling spy tools went to buy influence with the Biden administration. Obviously, they expect something in return.

It makes sense that they’re fishing for the contract to “hunt” down those nasty deplorable conservatives. After all, they’re supposed to work for governments to begin with. They can make money doing what they do best, spy on ordinary people without them knowing it, and not have to hide their tracks. Citizen Lab has the full rundown on them.

“NSO Group, which also goes by the name Q Cyber Technologies, is an Israeli-based company which develops and sells spyware technology. It is majority owned by Novalpina Capital, a European private equity firm.” Hmm, sounds like New World Order Globalists which might just be worth looking into. Under Biden’s repressive regime, that’s not likely. Anyone who tries it will get infected by “Q.” One way or another.