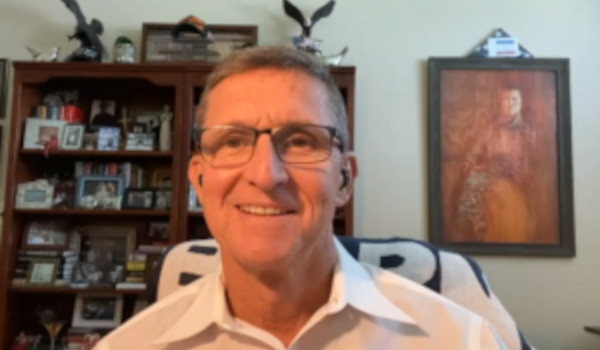 Lt. General Michael Flynn is back to doing what he does best, dropping bombs, at least metaphorically speaking. The former National Security Advisor to President Trump, former Director of the Defense Intelligence Agency and retired US Army Lieutenant General has been extremely vocal in his support of President Trump, especially after the compromised Department of Justice attempted to railroad him, only to walk back their false charges in shame. In a September 10th interview with USAWatchdog Flynn made several massively newsworthy points about the Arizona 2020 Election Audit and the mainstream media has been frantically burying it. (It took almost an hour just to find the interview via Google, and that was using quotes directly from it.)

Lt. Gen. Flynn made an impressive case that the US is under a concerted attack from without and within with the goal of stripping Americans of their freedom and imposing a communist-style single-party state. And all of it, the entire plot hinges right now on one state, and possibly a single man, in Arizona.

The incredible interview isn’t to be missed, it’s highly recommended you watch the whole 44 minutes because Flynn covered a LOT of ground. But here are the highlights.

“Transitioning to all the noise that is bombarding the American psyche, it’s all intentional.  Don’t think this is all a bunch of haphazard things that are happening within our country.

The bigger 60,000-foot strategic view is that the country is being taken over by a very small minority of people that we call the Left, which is really a group of Marxists and communists who have decided over decades, and this is not just about Trump, have decided now is the time to do it . . . and they did.

They outmaneuvered the Republican establishment during this last November election. . . .Let’s talk about what’s coming out of Arizona.  Everybody knows this election was stolen.  No way in the world 80 million people voted for the administration occupying the White House—no way. . . .so, what is happening in Arizona? Well, they have discovered, and we had a hearing, and now we have results that are starting to come out because of the canvassing. This is no longer a conspiracy theory about election fraud.  This is a conspiracy alright, but it is a conspiracy within a group of people that stole the U.S. Presidential Election and also stole parts of the down-ballot votes, meaning the Senators and Congressmen. As you just mentioned the one senate race in Arizona.”

The General Zeroes In On The Arizona Audit

“So in Maricopa County, Arizona, which is the second-largest voting county in the country. And I think the first one is in Fulton Georgia. What they have discovered is that there is clear fraud, there are ghost ballots, there are shadow ballots, there are fake ballots. There are all these different types of fake ballots. And the numbers range from like 75,000 to 350,000, different categories of ballots that were basically false votes. Now the Arizona vote was only 10,000 I think 10,400 for the whole state that Biden supposedly beat Trump by.

So if we’re looking at upwards of 300,000 fake votes, false votes, then I can guarantee you that that election because of the Maricopa County debacle really, talk about treason. So, they, that county is going to cause the Senate of the State of Arizona to consider decertifying the entire election for the State of Arizona.

If they decertify, they have a hearing on the 21st of September, so coming up on the 21st is the next hearing by the Senate. People have to really now pay attention to this, because of all the different rules in the State’s legislatures and each state has its own set of rules.”

General Flynn also directed our attention to a single man who could derail the entire process in Arizona, given that he’s something of a “Swing vote”, Arizona State Senator Paul D. Boyer, a McCain supporter and a long-term opponent of the audit.

America-First rockstar State Senator Kelly Townsend alerted us to the danger Boyer represented early in August when Boyer withheld his vote to hold the Maricopa County Board of Supervisors in contempt of the legislature.

What is the reason we haven't arrested the Maricopa County Supervisors, you ask? A.R.S.41-1153 requires a majority vote (16) to hold them in contempt. AZ has a 1 seat majority, cannot afford to lose one R vote, but we only have 15, with Senator @PaulDBoyer voting no. It's on him.

“Now there are Republicans out in Arizona that are Anti-Trumpers, okay? They’re part of the McCain crowd and so if they make decisions, and there’s one of them I’ll give his name Boyer, his name is Boyer, he’s an Arizona Senator. If he makes a decision not to support the decertification because of the election he doesn’t like Trump, then he is impacting the future of the country actually. Because if they do not decertify the election in Arizona, clearly, with the fraud that occurred and actually in some cases criminal behavior, what appears to be criminal behavior. If this one guy, because this is one guy that I understand kinda holds a sway vote, because he’s a Republican, he’s a McCain-ite, but he’s also a Never-Trumper, and he’s just a young kid, I don’t think he understands the future of the country, and in some cases, these historic moments in time are really in the hands of one or a few people. And so Arizona holds the future of the country, Arizona Senate and State Legislature holds the future of the country.

Because, if they do not decertify, then these other states like Pennsylvania, Wisconsin, Michigan, Arizona, Nevada and others actually that could do audits, it causes them to go: “Well, you know, if they couldn’t do it, why should we bother”.

“So there’s a clear conspiracy in Maricopa County by the County Commission, the election commission, definitely. There’s going to be charges that are going to be brought against some of these county commissioners up to the Attorney General in the state. And there’s going to be a hearing on the 21st that’s going to decide whether or not they move forward to decertify this election.”

Now the nation watches and waits with bated breath for September 21st, and the reckoning we hope will follow unless apathy reigns and good men do nothing.

100 Million Year Old Discovery is ‘One of a Kind’