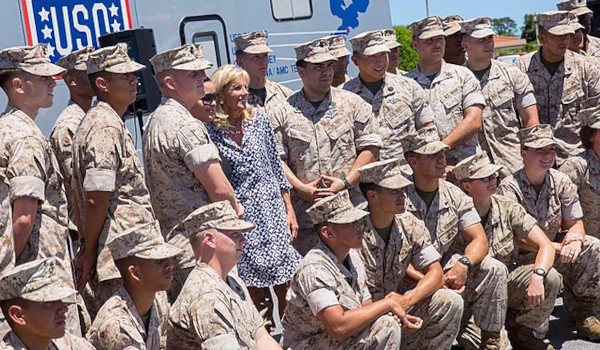 With tempers in the military flaring due to the Biden-Harris regime’s continuous insults toward our honorable men and women in uniform Jill Biden is attempting to to make a token effort to curry favor with military families in precisely the same way she and former first lady Michelle Obama once did: through the ‘Joining Forces initiative’.

Bidens Know How To Treat Our Military Don’t They?

Biden asked, “How can we hope to keep our military strong if we don’t give our families, survivors, and caregivers what they need to thrive? If we don’t act on our sacred obligation?”

Because clearly starting up a witch hunt that targets anyone who flies a Gadsden flag or supports the Second Amendment surely lines up with their sacred obligation doesn’t it? Or perhaps reassigning members of the military capriciously with little to no cause while simultaneously questioning their loyalty? That wouldn’t pose a problem would it? Or oooo… even better! How about calling them “Stupid bastards” on international television! Is that a good way to support our troops?

Do the Biden’s really think that this pandering effort is going to wash away the decades of damage done to our military under the Obama White House? Or the stain of dishonor from Hunter Biden’s less-than-honorable discharge? A blow only softened by having the Vice President for a Daddy?

Yes, we didn’t forget that Joe Biden in a 2016 speech overseas said,

“I have incredibly good judgment. One, I married Jill, and two, I appointed Johnson to the academy. I just want you to know that. Clap for that, you stupid bastards,” Biden said in the video.

A few moments later, Biden appeared to call the soldiers in the crowd “a dull bunch,” saying that they “must be slow.” Take a look at the video below, heck just the thumbnail, the soldier over Biden’s right shoulder? Her facial expression says it all.

According to the AmericanIndependent, “Joining Forces began in 2011 under President Barack Obama’s administration and was led by Mrs. Obama and Jill Biden, when Joe Biden was vice president. The mission was to encourage the public and private sectors to support service members, veterans, their families and their caregivers. The program focused on education, employment, and wellness.”

With all due respect to Dr. Biden (she’s a Doctor of Education, so most ordinary folks would just add the post-nomial PhD… but… you know.. ego), the military and their families don’t need another support group or a coupon booklet or a magazine filled with toll-free support center numbers. They need funding, stability, leadership and better post-service care. If she wants to do something productive, maybe talk to ol’ Joe about continuing President Trump’s groundbreaking VA reforms, and do it quietly, not just for the brownie points. Maybe then she can earn our military’s respect in a way that her husband never will, and spare them another pointless, mandatory photo-op.