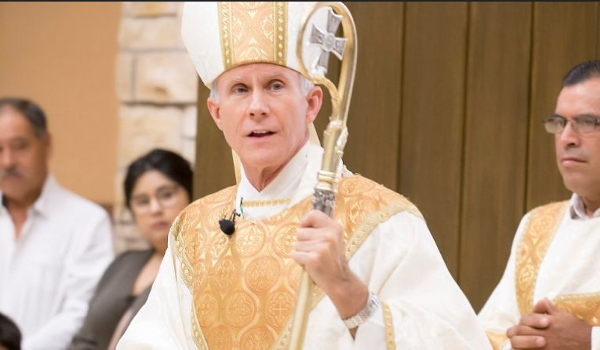 Bishop Joseph Strickland got totally behind a roughly ten-minute video posted on YouTube by a priest in another Diocese. The Catholic leadership of Tyler, Texas, has no problem at all separating church from state. They don’t see anything at all wrong with endorsing Father James Altman for boldly and firmly declaring that anyone who votes for, or supports Democrats, must immediately repent or else burn in Hell for eternity.

If you consider yourself a Democrat then you simply cannot be a Catholic. Everything that Democrats believe in is evil. Such “pretenders” must “repent” of their support for the party and its platform or they will “face the fires of Hell.” And “Yes, Virginia, there is a Hell,” Fr. Altman thunders. Strickland endorses each and every word. “As the Bishop of Tyler I endorse Fr. Altman’s statement in this video. My shame is that it has taken me so long.”

Bishop Strickland went even further than that. “Thank you Fr Altman for your COURAGE. If you love Jesus & His Church & this nation…pleases HEED THIS MESSAGE.” Father Altman, the pastor of St. James the Less Catholic Church in LaCrosse, Wisconsin, admits that “the church is not a political power but is a moral power,” as counseled by emeritus Pope Benedict XVI. “politics fundamentally should be a moral enterprise. the church has something to say about politics.”

“When politics and politicians act in immoral ways, we have a duty to speak up about it,” he insists, over an image of Nancy Pelosi. “Here’s a memo to clueless, baptized Catholics out there: You cannot be Catholic and a Democrat.” It’s the equivalent of self-excommunication. “Their party platform is absolutely against everything the Catholic Church teaches.” Bishop Strickland claps and cheers. “So quit pretending that you’re Catholic and vote Democrat. Repent of your support of that party and its platform or face the fires of Hell.”

As the Bishop of Tyler I endorse Fr Altman’s statement in this video. My shame is that it has taken me so long. Thank you Fr Altman for your COURAGE. If you love Jesus & His Church & this nation…pleases HEED THIS MESSAGE https://t.co/D413G0lfQV

Killing babies is not acceptable

Fr. Altman got really warmed up when describing the “60 million aborted babies standing at the gates of Heaven, barring Democrats entrance.” If you back the evil Democrat platform, even indirectly, then “nothing you can say will ever excuse you.” Nothing except to repent and change your evil ways. “There were zero faithful Catholics who voted for that godless politician [Barack Obama] who had the audacity to blaspheme and say God bless Planned Parenthood, the most racist organization on the face of this planet.” More than one Bishop would agree wholeheartedly with that.

Father Altman and Bishop Strickland aren’t alone in their opinions. Much higher up in the Vatican hierarchy, Archbishop Carlo Vigano of Rome wrote a letter not long ago which even had non-Catholics declaring “holy sh*t.” The Deep State “children of darkness,” the former Vatican religious delegate to the United States warned, “decided to show their cards” by “revealing their plans.”

The Bishop would also agree with the Cardinal that “In recent months we have been witnessing the formation of two opposing sides that I would call Biblical,” which he wrote in an open letter directly to President Trump. “The children of light and the children of darkness.” It appears “that the children of darkness,” Vigano writes, “whom we may easily identify with the deep state which you wisely oppose and which is fiercely waging war against you in these days – have decided to show their cards, so to speak, by now revealing their plans.” These evil forces, he notes, “often hold strategic positions in government, in politics, in the economy and in the media.” The good on the other hand, “are held hostage by the wicked and by those who help them either out of self-interest or fearfulness.” The worst part, the Cardinal warns, is that “they seem to be so certain of already having everything under control that they have laid aside that circumspection that until now had at least partially concealed their true intentions.”