Twenty-Nine men have been charged with the systemic and repetitive rape of a young girl over the course of a seven-year period taking place between 2003 and 2010 in West Yorkshire, England, UK. When the seven years of rape by twenty-nine men aged from 35-64 began, the girl was only 13 years old. These men are by definition jihadis, because the epidemic of “grooming gangs” raping young girls in the UK have been predominantly by Pakistani Muslims according to Home Secretary Sajid Javid who promised a review into the characteristics of grooming gangs in 2018.

Javid said that high-profile cases included a “high proportion of men of Pakistani heritage” and that “cultural reasons” could be at play. Terrifyingly the “Conservative” government of the UK caved to cancel-culture pressure and in December of 2020 the British government issued a report insisting: “Research has found group-based child sexual exploitation offenders are most commonly white,” that is, British non-Muslim.

UK Authorities Pressured to Declare “offenders are most commonly white,”

Despite Overwhelming Evidence They Are Jihadis

The feigned offense started almost immediately even though, the UK leftists were even acknowledging the problem in 18′, Labour MP for Rotherham, Sarah Champion, was criticized in 2017 for claiming the UK “has a problem with British Pakistani men raping and exploiting white girls”.

“Why does this keep happening? “Muhammad is the apostle of Allah. Those who follow him are ruthless to unbelievers, merciful to one another” (Qur’an 48:29). A survivor of a Muslim rape gang in the UK has said that her rapists would quote the Qur’an to her, and believed their actions justified by Islam. Thus it came as no surprise when Muslim migrants in France raped a girl and videoed the rape while praising Allah and invoking the Qur’an. In India, a Muslim gave a Qur’an and a prayer rug to the woman he was holding captive and repeatedly raping. And the victim of an Islamic State jihadi rapist recalled: “He told me that according to Islam he is allowed to rape an unbeliever. He said that by raping me, he is drawing closer to God…He said that raping me is his prayer to God.” In India, a Muslim kidnapped and raped a 14-year-old Hindu girl, and forced her to read the Qur’an and Islamic prayers.

The Qur’an teaches that Infidel women can be lawfully taken for sexual use (cf. its allowance for a man to take “captives of the right hand,” 4:3, 4:24, 23:1-6, 33:50, 70:30). The Qur’an says: “O Prophet, tell your wives and your daughters and the women of the believers to bring down over themselves of their outer garments. That is more suitable that they will be known and not be abused. And ever is Allah Forgiving and Merciful.” (33:59) The implication there is that if women do not cover themselves adequately with their outer garments, they may be abused, and that such abuse would be justified.”

According to Leading Britain’s Conversation, the following men were charged in the West Yorkshire grooming case,

For comparison here is the “Huddersfield Gang” who were jailed in 2018 for multiple charges of child rape in a frighteningly similar case according to the Independent. 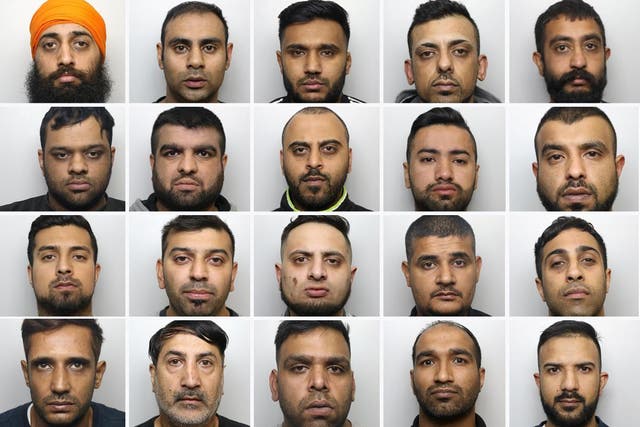 In 2020 twenty-one men were arrested and charge in Oxford, 185 miles away from Yorkshire, according to the BBC “The men, mostly British citizens of Pakistani origin, operated in the Cowley Road area, where student digs sit alongside family homes, and ethnic food shops and pawnbrokers neighbour hip bars and vibrant restaurants.” They were captured after committing horrible acts on dozens of girls.

“Some of the girls contracted sexually transmitted infections and became pregnant – or both – with one 12-year-old girl, who was branded with the initial of a man who claimed to “own her”, being made to have a back-room abortion.”

The cancel-culture mob in the UK claimed the scalp of their biggest target in 2018 when they ‘unpersoned’ former English Defense League activist Tommy Robinson who was working as an independent journalist to bring international attention to the epidemic of child sexual exploitation by the overwhelmingly islamist grooming gangs. British authorities and media have since shown a much keener interest in keeping Robinson down instead of tackling a problem, which everyone seems to know about but no-one cares to admit, head-on.