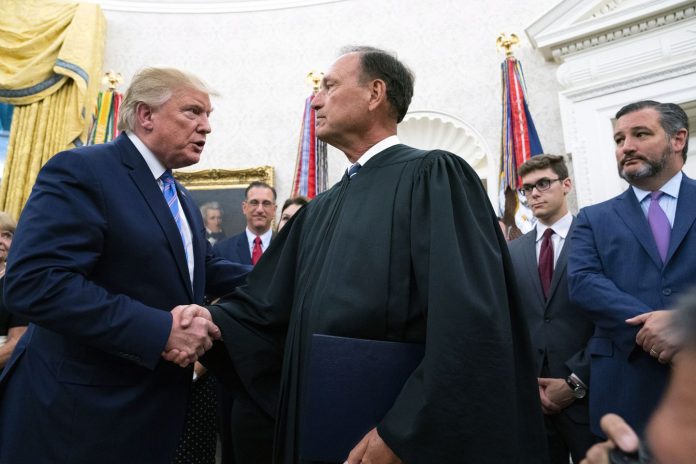 Alito began his speech by cautioning that, aside from specific references to Supreme Court cases, he is not going to comment on the legality of COVID restrictions, and is not making any statements as to whether the restrictions constitute good policy.

The Supreme Court Justice stated that the COVID pandemic has “highlighted disturbing trends that were already present before the virus struck.”

Alito elaborated on that point, saying that cases involving COVID restrictions have “pointed up emerging trends in the assessment of individual rights. This is especially evident with respect to religious liberty. It pains me to say this, but in certain quarters, religious liberty is fast becoming a disfavored right.”

The Left’s War on Religious Liberty

Alito discussed how the Religious Freedom Restoration Act was passed in 1993, and how the passage was bipartisan. He then contrasted it with the backlash faced by states that have attempted to pass or passed similar legislation in recent years.

He then turned to “the protracted campaign against the Little Sisters of the Poor,” the Ralph’s pharmacy case, and the Masterpiece Cakeshop case. Alito remarked, “You can easily see the point, for many today, religious liberty is not a cherished freedom, it’s often just an excuse for bigotry and it can’t be tolerated, even when there is no evidence that anybody has been harmed. And the cases I just mentioned illustrate the point. As far as I’m aware, not one employee of the Little Sisters has come forward and demanded contraceptives under the Little Sisters’ plan. There was no risk that Ralph’s referral practice would have deprived any woman of the drug she sought and no reason to think that Jack Phillips’ stand would deprive any same-sex couple of a wedding cake. The couple that came to his shop was given a free cake by another bakery, and celebrity chefs have jumped to the couple’s defense.”

The Supreme Court Justice then noted that COVID restrictions which “blatantly discriminated against houses of worship” in California and Nevada were upheld by the Supreme Court. Alito said that in both cases, the rationale was that the court should defer to the governors. He added that this deference meant that Nevada treated “casinos more favorably than houses of worship.”

“If what I have said so far does not convince you that religious liberty is in danger of becoming a second-class right, consider a case that came shortly after the Nevada case,” he continued, pivoting to a discussion of U.S. District Judge Theodore Chuang’s ruling which suspended the FDA’s requirement that women who wish to obtain an abortion pill must pick up the drug at a clinic.

Alito told the crowd that Chuang’s rationale was that enforcing the rule would interfere with abortion rights because some women might not obtain the pill due to fear of contracting COVID if they leave their homes. He also noted that at the time of the decision, Maryland’s governor had opened many places of business, and “apparently concluded that Marylanders could safely engage in all sorts of activities outside the home… If deference was appropriate in the California and Nevada cases, then surely, we should have deferred to the federal Food and Drug Administration on an issue of drug safety. But no, in this instance, the right in question was the abortion right, not the right to religious liberty, and the abortion right prevailed.”

This is ALARMING…Biden Begins Surrounding Himself…

AG Barr and DOJ Fire Back at The Fake Media