A 23-year-old hiker from Baltimore, Maryland decided to totally ignore the signs advising of danger. The forbidden access markers didn’t phase him either. He wanted a selfie at the edge of the Vesuvius crater if it killed him. It almost did. Italian police are still trying to figure out how much to fine him.

The signs were posted in English as well as Italian. For those who don’t speak either one they show an image of a person falling over the lip of the crater. The unnamed American decided to ignore the whole thing. Okay, its dangerous, I’ll be careful, he lied to himself.

Mt. Vesuvius is the volcano famous for producing all those artifacts in Pompeii, including the statues which are so realistic because there are real people under that volcanic ash.

Signs are for people who mind risking their lives. Three of his relatives were just as reckless that fateful Saturday morning. So were two British tourists. Since they all broke the rules together, that made it alright.

Safety in numbers, right? Wrong, Italian carabinieri say. Those signs are there for a very good reason and ignoring them has consequences, sometimes fatal ones.

He may have walked away with his life but Mr. Baltimore will leave a large amount of cash behind as a donation to the Mt. Vesuvius trail improvement project.

Just as soon as the court figures out how much to fine him. Enough to buy a bunch of new signs, locals predict. It all started when he wanted to get that perfect selfie. 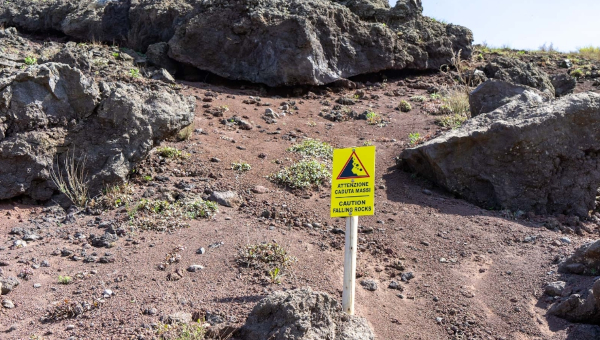 Oops, I can get it

The man’s first mistake was taking the unauthorized trail right up to the lip of a thousand foot drop into the famous Vesuvius crater. The one the signs said the ground was loose under, while warning it’s easy for it to fall right out from under your feet.

He walked softly. He got up to the edge and in the process of snapping an image dropped his phone. Oops.

Just like the signs warned, when he reached down to retrieve his rap-rod, the ground gave way under him and he followed his phone straight down the slope.

Just when he thought he was a total goner, the tourist stopped sliding. With visions of a huge doodlebug waiting at the bottom of the huge funnel-shaped crater of loose sand, he was smart enough not to move an inch. He was afraid to breathe until search and rescue got a rope around him.

Once back on solid ground, all he had were a few bruises on hands, arms and back. Next time, he’ll obey the signs. He’s never even going to walk on grass again.