Audra Johnson, a member of the Michigan Liberty Militia, is running for Congress to represent the people of Michigan. Johnson is challenging RINO incumbent Congressman Peter Meijer (R-MI3), who doomed his GOP career when he voted in favor of impeaching President Trump in January, shortly after he was himself elected. A vast majority of mainstream media sources have seized on her membership with the militia and her presence at the “Save America Rally” on January 6th in Washington, D.C.

My name is Audra Johnson and I’m running for Congress, in Michigan, against #RINO @RepMeijer and failed candidate #TomNorton If you would RT and share the word I would be grateful. #audraforcongress pic.twitter.com/kT7pxBf3DR

Audra like many Michiganders hasn’t taken kindly to Meijer’s dramatic flip from ostensibly being a conservative Republican to flipping on President Trump and the GOP almost from the word go. She was also recently subject to a lovely New York Times hit piece who seized on just a few things: her refusal to take the COVID19 “vaccine” (read as MRNA gene therapy), membership in a militia group (which is in no way illegal), her attendance of the Jan. 6th rally (she did not enter the Capitol) and her assertion that President Trump is in fact not a God.

“People think people who support Trump are like ‘Trump is our God,’”

And of course, her sharing the same feeling that an alarmingly large number of Americans currently share: “People are terrified,” Ms. Johnson added over grilled cheese and tomato soup at Crow’s Nest Restaurant in Kalamazoo. She added, “We’re heading toward a civil war if we’re not already in a cold civil war.”

Johnson initially gained some notoriety for her incredibly patriotic wedding to her former Marine husband which made headlines due to her dress emblazoned with “Make America Great Again”, Audra was one of the first to pull this particular power move which triggered leftists nationwide.

After the wedding, mlive reported, “Now that the wedding is making national news, people are targeting the couple and their friends and family with threats.

“I had to have militia members stay at my house last night,” Audra Johnson said. 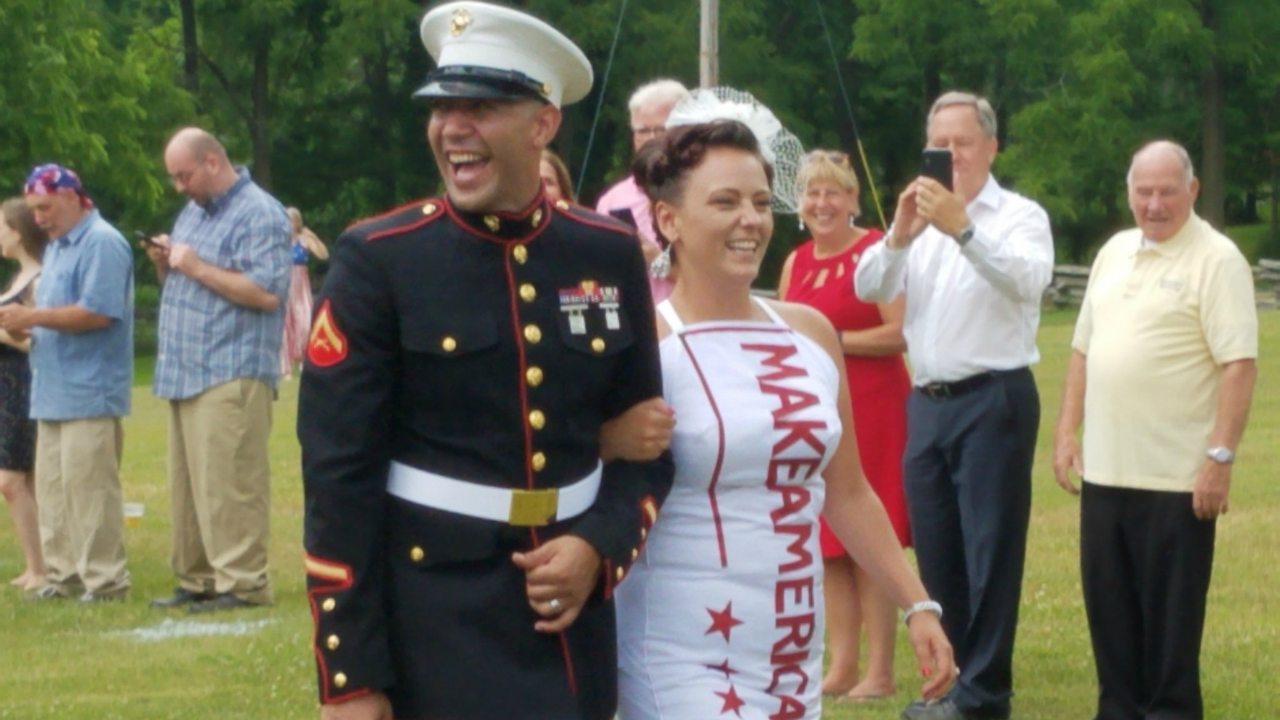 Local Fox Affiliate Fox17 reported, “Johnson and her “Make America Great Again” dress have been a common sight at pro-Trump and right-wing rallies across the country. Last year, she was removed from Michigan’s Capitol while protesting Gov. Gretchen Whitmer’s stay-at-home order.” According to the article from Fox, Johnson hasn’t filed officially with the Federal Election Commission yet, but her campaign manager tells FOX 17 they plan to later this month.

The state of Michigan’s Congressional redistricting is still pending so the situation is very fluid, but Audra (listed as Audra Lemons-Johnson) joins US Army Veteran and Village President Tom Norton and Gabriella Manolache a Hungarian-American Attorney whose family fled communism in the 1980s on the Primary ballot according to Ballotpedia. Norton was defeated by Meijer in 2020 by a margin of 35 pts.

Notably, President Trump won Michigan’s District 3 in both 2016 with 10pts. over Clinton and 2020 with 4 pts. over Biden, a much tighter race (If you trust Michigan’s results). That being said: Meijer seems fairly doomed in his re-election campaign assuming redistricting doesn’t throw everything off, and it will be down to these three candidates.

They Want to Defund the Police, Yet Here are the Numbers for Their PRIVATE Security

Here is What Biden Was Doing During the Fallout