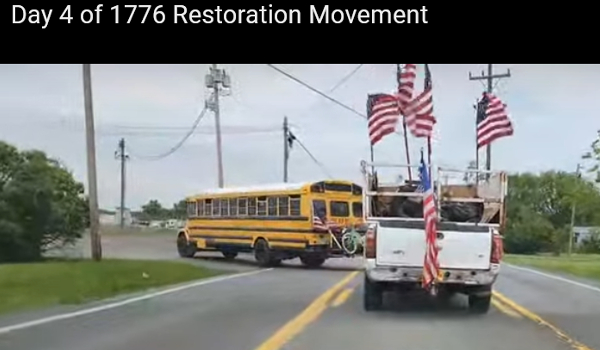 America is still a place to be proud of but the New World Order wants that to end as soon as possible. They’ve been checking off the objectives of Agenda 2030 one by one. It’s no surprise that the peaceful efforts of We the People were effectively countered by unlimited Deep State resources. The “People’s Convoy” has been officially disbanded but We the People refuse to surrender. The 1776 Restoration Movement picks up the fight, right where People’s Convoy left off.

There is a fire in the hearts of every patriot in America which won’t die out. Zachary Petrizzo has been un-officially placed in charge of all the media misdirection. Every word he publishes in The Daily Beast or taps out on Twitter gets echoed by the liberal masses as the gospel truth.

If you’ve been following him, you’re convinced all the deplorable truckers gave up and went home. He’s wrong.

We the People invaded Virginia on Monday, sort of, but Petrizzo probably won’t be covering that. If he does, you can be sure it will be slanted heavily away from the truth.

They may be down to a handful of semis, a firetruck, and a school bus as the heavy equipment, yet We the People continue to make their presence known in the District of Columbia. With the help of some right focused reporting, all of America can see the truth for themselves. 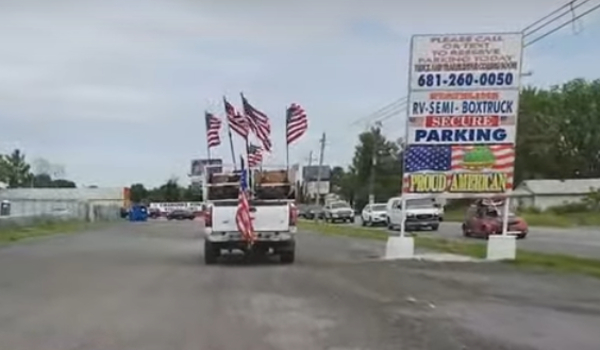 They abandoned the Hagerstown, Speedway and negotiated a new location for base camp, perched precariously along Virginia’s border with West Virginia. Despite Petrizzo’s misdirection, the movement to defend America rolls on. For now, they’re setting up at an auto auction site.

The mainstream media refuses to cover the facts so the only independent sources of information are the livestreams. WYSIWYG TV and FirstResponder Media are both officially sanctioned by the movement to report on their behalf. Compare what you see on the screen with what Petrizzo writes about it later. Call it the “propaganda challenge.”

One of the biggest challenges facing the People’s Convoy was too many chiefs and not enough Indians. When David Riddell, aka “Santa,” ended up with a leadership role running the 1776 Restoration Movement, he made it crystal clear to all of America that this organization is not a mob rule democracy, it’s a “benevolent dictatorship.”

Only one person will have the final say on policy decisions, him. Along with that, he acknowledges comes ultimate responsibility for each and every decision and action of the group as a whole. Our founding fathers would have approved wholeheartedly. 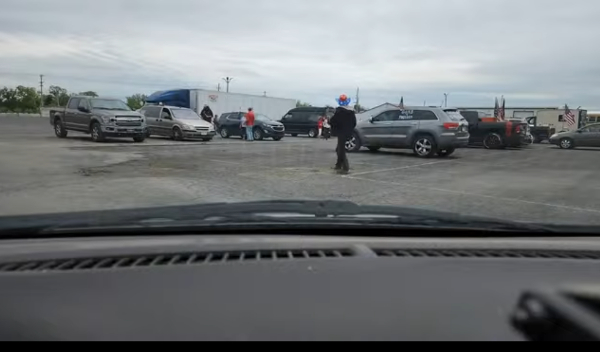 When the founders argued and debated the document which would become our beloved and endangered Constitution, they knew full well that such a benevolent dictatorship is the most efficient way to run things.

What works great for a company or small group can get out of control on a national scope, so they limited the dictatorial powers of the president with checks and balances, then wrote in some loopholes to let a president take charge of America, when he needs to. Through the use of emergency powers. Donald Trump flirted with that. The Deep State slapped him down so hard for it that he still hasn’t completely recovered. Brussels was seriously unhappy with Trump and every aspect of his deplorable nationalism.

It’s no surprise that Joe Biden ended up in power. Not as a legitimate president but as the appointed Governor of the Central American province. Borders are about to be completely erased when Title-42 fades into the sunset. Even worse, any day now, the United Nations will vote on a measure which, when passed, will hand the World Health Organization full authority to declare a pandemic, then send in troops to enforce any arbitrary regulations they declare appropriate.

There’s not a single word in the language to stop them from declaring gun violence a health crisis of pandemic proportion, then send in all the whitehats to round up guns. Second Amendment? Amendment to what? Oh that constitution thing? Use it for toilet paper. The United States of America is a closed and dusty chapter of world history.