Following the cataclysmic collapse of Andrew Cuomo‘s governorship, the ENTIRE Board of Time’s Up, a non-profit charity that raises money to support victims of sexual harassment has resigned in shame including prominent members Shonda Rhimes and Eva Longoria.

The organization issued a statement acknowledging the massive shakeup which has also seen the resignations of CEO Tina Tchen and Time’s Up Legal Defense Fund chairwoman Roberta Kaplan. However, the statement is little more than a window dressing to cover up the massive fallout from the scandal that erupted from a Washington Post story that exposed texts from Tchen telling colleagues to “stand down” from plans to release a statement supporting former Cuomo staffer Lindsay Boylan‘s accusations.

The texts came shortly after two people from Time’s Up spoke with disgraced Cuomo aide Melissa DeRosa, long considered an accessory and enabler to Cuomo’s crimes and his primary ‘fixer’ until she broker her silence in February.

The Governor and his scandals aren’t mentioned even once in the statement which only obliquely refers to “the current crisis”, with out further explanation.

“It is crucial to us as a board that the organization remain in service to this seismic, global work to demand equity and disrupt systems that foster discrimination, harassment and abuse. We see the current crisis within TIME’S UP as an important opportunity for growth and change.”

According to The New York Post, “The current board will be replaced entirely by new members over the next 30 days. Four current board members — Ashley Judd, Colleen DeCourcy, Raffi Freedman-Gurspan and Gabrielle Sulzberger — will remain on briefly to help with a “smooth transition”, the group said.”

The Scandal That Ran Out The Clock At Time’s Up

At the end of the day, it was all about politics. When Time’s Up were about to release a statement supporting Boylan’s accusations against Cuomo, Tina Tchen gave the order to stand down after a Fox News reporter contacted the group for a statement according to DailyMail “Tchen advised against releasing a statement, agreeing with board member Hilary Rosen, who was concerned about the negative impact of giving Fox ‘a headline to run all day.'”

‘As a survivor I have always thought that serious allegations of sexual harassment should not be politicized and Fox News had a reputation for doing just that,’ Rosen said in a statement. ‘So part of this text chain is only responsive to the question about Fox. Context matters.’

Rosen can grandstand against about allegations being “politicized” all she wants, but this was a glaringly POLITICAL decision. And now not only have she and Tchen paid for it, but so has the ENTIRE board of Time’s Up.

Can the group get back to their roots of helping women be safe and heard enough to expose rapists, molesters, and harassers without becoming leftist apparatchiks again? Time will tell. 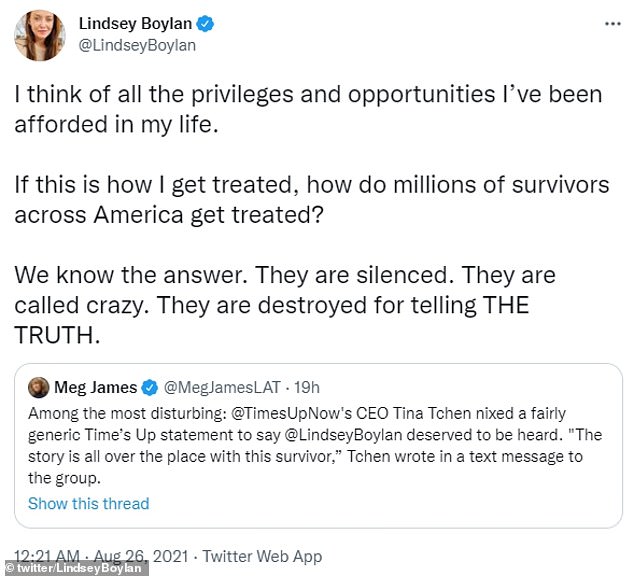