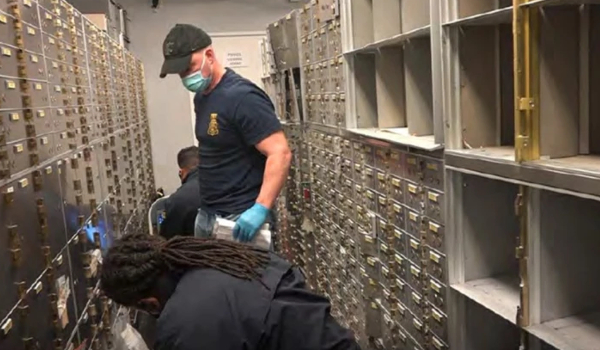 The FBI stole his money. That’s the way Joseph Ruiz sees it. He wasn’t the only victim either. Not by a long shot. The bold daylight robbery was just another day at work for the Federal Bureau of Instigation. They botched their seizure raid so badly, court documents say, the whole operation might end up imploding.

The FBI is in hot water again. You may remember that high profile raid back in March where the bureau walked in to U.S. Private Vaults on Olympic Boulevard in Beverly Hills and started drilling the locks on safe deposit boxes.

They cast a really wide dragnet on suspiciously flimsy evidence. They had to mislead a judge to get the warrant and now they wonder why they aren’t getting any convictions. Instead, they’re getting sued by the people they stole from.

In today’s enlightened world of mostly legal marijuana, just because Fido barks when he sniffs some cash doesn’t mean it was used in a drug deal. That didn’t stop the FBI from using that as the main foundation of their “asset forfeiture” cases.

They thought by stealing from criminals, they could keep the loot for themselves. Only they targeted the general public. To the bureau, anyone who stashes cash “anonymously” must be a criminal. Wrong again.

Including Ruiz, 800 people were ripped off by the FBI that week. About 300 are screaming bloody murder and demanding their property back. “Ruiz and 65 others” say it’s unconstitutional and sued them. “It was a complete violation of my privacy. They tried to discredit my character.”

Lawyers for the box holders argue the “entire operation is a ‘money grab’ to acquire tens of millions of dollars for the Justice Department through forfeiture.” No “criminal conviction is required.” All the government has to do is prove “it’s more likely than not that the money or property it seeks to confiscate was linked to criminal activity.” They didn’t even do that in this case.

Ruiz, like many of the others, was never charged with a crime. The feds found “probable cause to believe that the funds in his box were linked to drug trafficking” so decided to keep it. District Judge R. Gary Klausner ruled otherwise.

As far as “Ruiz and three others” are concerned, there’s no “specific factual and legal basis” for the seizure so the feds “violated their rights to due process.” It was an unreasonable search and seizure in violation of the Fourth Amendment. The FBI stole $57,000 from Ruiz and called him a drug dealer.

He makes bongs out of liquor bottles but doesn’t sell that many of them so he must “be involved in the cannabis industry in other ways,” they reasoned. After all, he only reported $18,510 in income since 2019 from his day job. He told them he got insurance settlements but they didn’t believe him. His records don’t show online because he settled.

“Once Ruiz turned over records confirming the payments — one for a car accident injury and another for chronic housing code violations at his apartment building — the FBI, under court order, gave back his money.” What happened is clear to Ruiz. “They pulled a bank heist in broad daylight,” Ruiz declared. “They didn’t even apologize.”

Another box holder, trading under the handle “Charles Coe” for personal reasons got a lawyer to fight for his money too. The FBI says he has to be a drug dealer because of “the way the person bundled his cash in thick, thin and broken rubber bands; tightly tape-wrapped paper; bank bands; and plastic CVS and paper Good Neighbor pharmacy bags.”

Without commenting on the specifics of his client’s case, Coe’s attorney Benjamin Gluck points out, U.S. Private Vaults customers “included many immigrant business owners who escaped repressive regimes where banks are unsafe and have collected amounts of cash as their life savings over many, many years.” They like to use rubber bands and shopping bags. That doesn’t instantly and automatically mean drug dealing and money laundering. The whole case could end up collapsing.