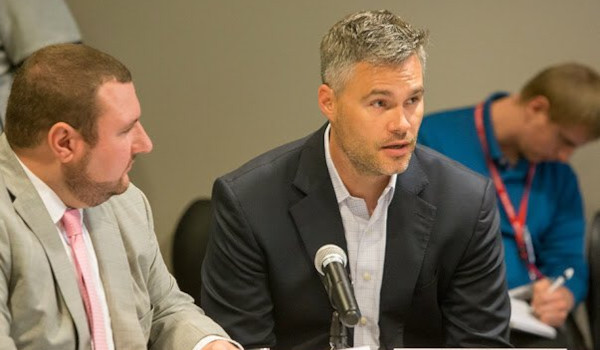 The lines between lobbyist and politician in the cesspool of Pennsylvania politics have become even murkier as Pennsylvania Senate Majority Leader Jake Corman unmasks a top lobbyist from a powerful Harrisburg firm to become his new chief of staff. This is exactly the kind of swamp creature, incestuous insider-dealing that disgusts grassroots conservatives and Jake Corman should know better.

“Corman, a Centre County Republican who is widely considered next in line to ascend to the chamber’s top leadership post, told senators last week in an email that he had hired Krystjan Callahan, a partner at Maverick Strategies, a well-known lobbying firm run by Ray Zaborney, who also runs Corman’s campaigns.”

Callahan, working with The Mavericks companies headed by Ray Zaborney has helped raise Corman millions of dollars for years. In August, The Caucus and SpotlightPA reported that Corman raised money at an exclusive California fundraising event for “a dark money group launched by Zaborney whose donors — and agenda — are largely a secret. The event coincided with a fundraiser, organized by one of the Maverick firms, that Corman was having at the same resort.”

Corman has been catching some serious heat from the more conservative wing of the GOP and recently drew the ire of Congressional Candidate Teddy Daniels who called for his resignation, as well as OAN’s Christina Bobb who called him out for pushing a false narrative surrounding efforts to launch an audit in Pennsylvania.

Boom💥💥💥 @JakeCorman is a LIAR! What do you expect though from a swampy, sellout establishment hack. He had no problem hiding when @dougmastriano was leading the charge & taking the bullets. What a coward. #resignSnakeyJake https://t.co/oRgdwjpBat

In a Statement to DSRH Daniels said,

“Unfortunately this is business as usual in state & federal level politics. This definitely blurs the lines on what is ethical, but when have you known career politicians to be ethical? Should anyone really be surprised?”

A River Of Sludge Unmasks Before The Nation

The sleaze that has permeated the PA Legislature is pervasive and abhorrent. It runs through Pennsylvania’s capital like a perverse, foul, putrescent shadow of the Susquehanna. It demonstrates the stranglehold that dark-money pumping lobbying firms and special interests have on Harrisburg and Pennsylvania politics as a whole.

In American history, there have been many cities at different times which became synonymous with graft, power politics, and corruption, New York, Chicago, and now add…Harrisburg, PA.

The phenomenon is all the more concerning when you consider that Pennsylvania is one of the most severely compromised states found to have massive irregularities in the 2020 Election. The state was one of the four named in Texas v. Georgia, Wisconsin, Michigan, and Pennsylvania due to the radical changes that were made to the manner and location of elections without the Constitutionally required authorization of the legislature.

The most disturbing element of this though is its public nature. Callahan’s appointment is highly publicized, they aren’t even hiding it anymore. Conflict of interest is now meaningless. They’re proud of it. Because they know that at least half of the country is either ignorant or apathetic. They either don’t know or don’t care.