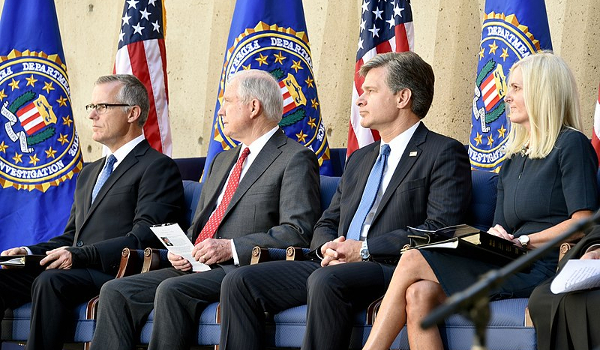 Attorney General William Barr, through an official Department of Justice spokesperson, pushed back hard on the lies which the corrupt and complicit fake network media have been spewing since Tuesday. No, they firmly declare, the investigation is far from over, this is only the beginning.

Attorney General William Barr made the mistake of giving a few words to reporters on Tuesday. The media instantly twisted them into a weapon and stabbed him in the back. As the liberal fact checkers like to say, his words were “taken out of context,” and “lacked background information.” The DOJ was quick to call them out for it but the networks refuse to report that half of the story.

what the Attorney General stated. The Department will continue to receive and vigorously pursue all specific and credible allegations of fraud as expeditiously as possible.” @ClareHymes22 @CBSNews

“Some media outlets have incorrectly reported that the Department has concluded its investigation of election fraud and announced an affirmative finding of no fraud in the election,” the Justice Department firmly declares.

“That is not what the Associated Press reported nor what the Attorney General stated. The Department will continue to receive and vigorously pursue all specific and credible allegations of fraud as expeditiously as possible.”

This battle is far from over. The media have been like sharks who found blood in the water ever since the Attorney General carelessly dropped a sound bite.

“U.S. attorneys and FBI agents have been working to follow up specific complaints and information they’ve received,” he asserted, then came what the networks call an “admission” that “to date, we have not seen fraud on a scale that could have effected a different outcome in the election.”

Remarks taken out of context

As the top lawyer for the Uncle Sam, AG Barr should be well aware that anything he had to say could be used against him. His mistake was in forgetting that the court of public opinion has no evidence rules, other than the ones laid down by liberal media fact checkers.

The Department made sure to point out that Barr has long been on the record as suspicious of the election procedure. Long before the election, he “repeatedly raised the notion that mail-in voting could be especially vulnerable to fraud.” He was right.

On Tuesday, Barr was talking about one of the central issues in the whole debate, the programming of the voting machines. To begin with, the issue was uncovered by the President’s lawyers, not the DOJ. The FBI has been strangely missing in action.

Deep State elements affectionately known in the Bureau as the “Hillary Clinton Fan Club” are frantically trying to avoid digging up anything which would jeopardize the rigged Biden “victory.” It’s no surprise that Barr would be forced to report that “so far, we haven’t seen anything to substantiate that.”

He hasn’t seen it because his underlings are covering it up. Some believe FEMA camps are being readied for those rats now. The media won’t tell you about those either.

Another thing that Barr said on Tuesday, which the media won’t cover, is that the FBI and DOJ aren’t the answer to every problem. The civil lawsuits filed by team trump, and many, many other plaintiffs are the proper way to remedy the fraud.

“Most claims of fraud are very particularized to a particular set of circumstances or actors or conduct.” As far as the DOJ responsibilities, they’re performing them now. The fraud claims “are being run down. Some have been broad and potentially cover a few thousand votes. They have been followed up on.”

Team trump has already scored a major victory in Pennsylvania when a judge ruled that counties had to stop counting mail-in or absentee ballots “for which voters gave missing identification information after a deadline that had been extended.”

The reason why is because the secretary of state “lacked statutory authority” to grant the extension. The media isn’t interested in covering that though.