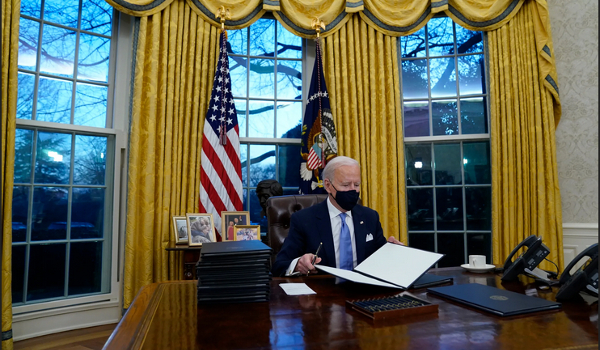 Joe Biden’s first full month as Imperial Leader are over and so far all he’s managed to do is totally piss off every single conservative American while doing his best to help feed the swamp and all it’s vicious critters.

They had the Imperial Leader’s throne room all set up, so the moment His Wisdom Joseph Robinette Biden Jr. walked in, his pens were already ready for him to start signing off Palace Decrees like a human powered “green” machine.

They gave Emperor Joe a whole “fine wooden box” full, decorated up with the Imperial Seal and an “imprint of his signature.” It was sitting on his desk before he raised his hand at the coronation ceremony. Things weren’t so smooth for Donald Trump.

When Donald Trump moved in, the gold plated pens he preferred “had to be placed on rush order.” He shifted to using a basic sharpie to save the taxpayers money. Joe Biden likes the gilt and glitter, no matter the cost.

He’s going all out to show the deplorable days of nationalism are a thing of the past. You can say goodbye to a booming economy and insisting on putting America’s interests first. We’re in one big happy global government now, where the orders come down from the Open Societies Foundations.

A third of Imperial Leader Biden’s first 100 days are behind him and Joe still hasn’t got much accomplished. The National Guard remains standing by, waiting for the insurrection that never developed. The look and feel of the Imperial Palace but the world has yet to learn if it will run better or not.

During his honeymoon period with the masses he’s managed to censor the conservative voices right out of the program. Washington is so polarized right now that politicians are afraid to go to the grocery store without an armed contingent of the National Palace Guard. 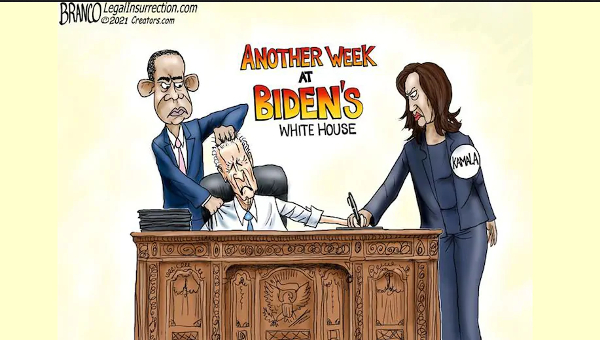 Brainwashed by the NWO

Biden is so brainwashed by the New World Order that he was photographed alone in the throne room, signing away like mad on the stack of Palace Decrees his handlers piled in front of him, wearing a mask.

Some say the only reason Joe wears a mask alone in his own office is because Trump didn’t like them. They called the Palace photographer in to capture it as a symbolic statement that mask wearing is a “culture war totem and political cudgel.”

The Palace Decrees have been flying like snowflakes in a Geo-engineered Texas Blizzard. The flurry of executive orders undo Trump’s policies one by one relentlessly.

Joe Biden is even talking to Canada’s rainbow sock wearing leader Justin Trudeau and telling NATO they can forget about paying their bills again. Robert Gibbs, press secretary for Barack Obama notes, “The subtext under every one of the images we are seeing from the White House is the banner: ‘Under new management.'”

The sooner that deplorables realize that their beloved hero is persona non grata the better. They might starting to get ideas that the Constitution is still in force. Joe won’t stand for that and the National Guard will treat you like you’re from Myanmar.

“Whether showing it overtly or subtly, the message they are trying to deliver, without engaging the former president, is to make sure everyone understands that things were going to operate differently now and that hopefully the results would be different, too.” The Ayatollah is getting all set for more pallets full of cash.