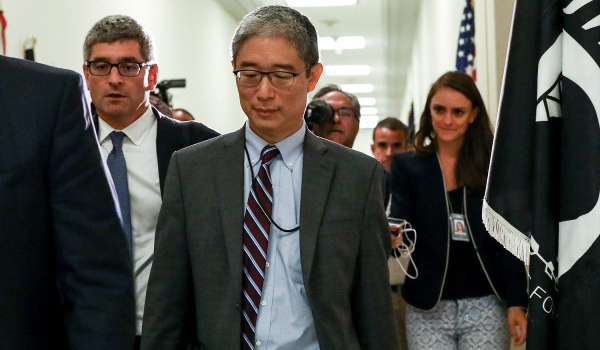 Bruce Ohr, the notorious Obamagate “back channel” messenger pigeon link between Christopher Steele and the Deep State Department of Injustice, flew the coop, the DOJ announced on Thursday. They gave him a head start before telling anybody about it. He “resigned,” they say, “late last month prior to his expected termination.”

A back channel Obamagate link

Former DOJ Associate Deputy Attorney General Bruce Ohr, happens to be married to Nellie Ohr, an associate of Glenn Simpson of Fusion GPS, who hired Christopher Steele to assassinate Donald Trump’s character in the Obamagate conspiracy. He’s smart enough to read the graffiti on the wall so made his exit before the criminal charges were filed. He was smack in the middle of the plot as a direct link between Christopher Steele and the FBI when Steele lost favor with the bureau.

An inside source leaked news of Ohr’s resignation to ABC News who then confirmed it with Kerri Kupec, an official DOJ spokesperson. Kupec issued a statement noting, “he retired on September 30, ‘after his counsel was informed that a final decision on a disciplinary review being conducted by Department senior career officials was imminent.'” After Inspector General Michael Horowitz revealed the Ohr back channel link, a “disciplinary review” began.

Bruce Ohr intentionally and illegally hid his covert meetings with “FBI officials and others” from his supervisors. Horowitz slapped him on the wrist for “consequential errors in judgment.” That’s putting what he did extremely mildly. President Trump has been furious about the secret link and the way Christopher Steele’s fictional dossier was used directly against him in both Robert Mueller’s witch hunt and the subsequent impeachment proceedings.

John Solomon broke the story in The Hill with a piece labeled “opinion” simply because the proof he had been expecting hadn’t yet materialized. “By early November 2016, Steele was terminated for unauthorized media contacts and the Federal Bureau of Instigation was turning to Bruce Ohr as a back channel.”

He soon got his proof of the secret spy link. The smoking-gun documents were released which broke Obamagate wide open. “Hundreds of pages of previously unreported emails and memos, provide the clearest evidence yet,” Solomon wrote. “Ohr’s own notes, emails and text messages,” verify he “communicated extensively with Steele and with Fusion GPS founder Glenn Simpson.”

Glenn Simpson, a close business associate of Nellie Ohr, was hired by Hillary Clinton’s campaign and the Democratic National Committee to dig up any Russian “dirt” on Donald Trump to be found. She allegedly used the secret federal databases like “Google Search” to find leads for Steele to follow up on. “Simpson hired former MI-6 agent Christopher Steele for the shovel work.”

The memos, notes, and messages lay out every link in the chain from how unverified “opposition research funded by his rival’s campaign, the DNC, and the DNC’s main law firm, Perkins Coie” became the core evidence to wire tap Carter Page. Things hit a snag when “Steele was banned from participating in the investigation in early November of 2016, just before the election because he leaked like a sieve.”

Steele personally handed his dirty dossier to Ohr at the FBI branch office in Rome, Italy. Ohr and Steele talked on Skype then, accompanied by his wife Nellie, met in Washington, D.C. at the Mayflower Hotel, on July 30, 2016 to talk about the “Trump-Russia research project.” The link was confirmed by “calendar notations and notes in Ohr’s handwriting” which “prove Ohr took him up on it and met with Glenn Simpson Aug. 22, 2016, ‘exactly one day before FBI counterintelligence official Peter Strzok formally opened an investigation.'”

How convenient. “Ohr’s notes document a meeting on November 21, 2016, with Peter Strzok, then-FBI attorney Lisa Page and ‘another agent.’ Ohr noted the FBI officials told him they ‘may go back to Chris’ even though they weren’t supposed to.”

Ever since then, Ohr was a stand-in for Steele. “When the FBI wanted to use something from the dossier, they interviewed Ohr, took a 302 report to legitimize the evidence as first party testimony instead of the third-party hearsay it was said to be, and used it like real evidence.” Now that the link is out in the open, it’s no wonder that Ohr took a powder. It will be interesting to see if he shows up for Congressional hearings. Handcuffs may even be in his future but nobody is holding their breath on it.

This is ALARMING…Biden Begins Surrounding Himself…