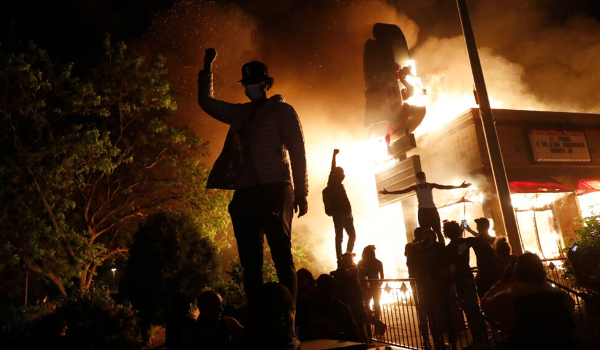 Nobody had a clue what – in the wide, wide, world of sports – was going on there, the independent report commissioned by Minnesota’s Department of Public Safety reveals. During the violent looting and burning in response to George Floyd’s death in May, 2020, there were way too many “breakdowns in procedure,” all because of “inadequate coordination.” The uncoordinated agencies in question were the local Minneapolis Police Department and the State DPS.

Wilder Research is living up to their name with the wild report they unleashed to settle the score between state and local law enforcement. The verdict is it’s a tie and they’re both guilty because they all acted like Keystone Kops to confuse each other, relentlessly.

They both managed to trample on the rights of citizens, the report notes. All of them, from looters to bystanders to journalists.

“On several occasions” officers “did not successfully differentiate between lawful and unlawful protesters.” Even a press pass from a liberal network news crew didn’t get you any relief from the heavy handed tear gas attacks.

Weighing in at a hefty 129 pages, the report was released Thursday, March 31. Their “independent, external review of the State’s response to the civil unrest and rioting” notes both agencies were working at cross purposes.

“A state official recalled, ‘we would be trying to implement containment, and then they would come through and just disperse everybody. So we were basically working against each other.‘ This resulted in a reluctance to share resources and work in a unified way to address public safety.”

The state police, meanwhile were concerned about all the tear gas MPD was blazing through. As noted in the report, one state official reported, “I recognized other behaviors that were concerning to me like the MPD’s use of chemical munitions. When they came to me and asked for additional chemical munitions, because they were running out, I told them ‘no.‘ I wasn’t willing to do that because I didn’t feel like their use of it was ‘judicious and appropriate.’”

They used their own stash to gas the news crew. “It was state law enforcement, however, that arrested the CNN crew reporting on the morning of May 29, 2020, in Minneapolis,” CNN snarls.

“There were several instances of journalists alleging they were being exposed to irritant or inflammatory agents, often referred to as tear gas, and other crowd dispersal methods and were wrongfully detained or arrested by law enforcement (it is unclear if it was state or local jurisdictions) despite displaying legitimate media credentials.” CNN makes sure tor report that part far and wide. They were treated like one of us deplorable conservative bloggers or something.

Everybody is sorry and promises to play nice, next time they’re in the sandbox together. “Both state-level officials and MPD representatives expressed frustration at the lack of communication between leadership at the MACC [Multi-Agency Command Center] and Minneapolis’ emergency operations center.“

ABOUT US
Contact us: [email protected]om
© Deep State Rabbit Hole 2020