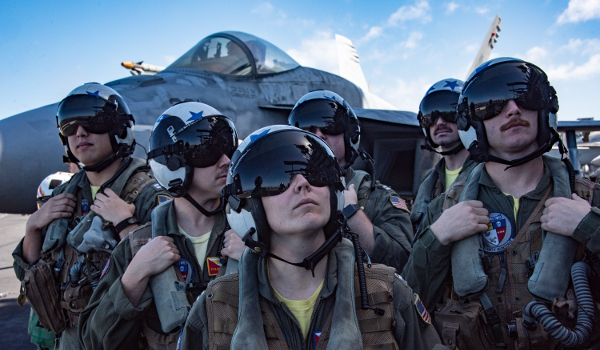 Over the weekend, what’s being described in the media as an “explosive” UFO report aired which totally blew viewers away. The Pentagon decided to stop trying to cover up the alien sightings because there are way too many of them to keep a lid on. According to one U.S. Military official who led the government sighting investigations, what we’re left with is “the fact that this is in our airspace and it’s real.” Lue Elizondo told 60 Minutes, that’s “when it becomes compelling, and that’s when it becomes problematic.”

Up and down the East Coast, there are so many UFO sightings that they can barely track them. The military calls them unidentified aerial phenomena, or “UAP” for short but it means the same thing. Little green men from space or time or another dimension or all of the above.

Former Navy pilot Lieutenant Ryan Graves patrolled the skies on the Atlantic coastline and he had incidents with the airborne illegal aliens “every day for at least a couple years.” He speculates that “the highest probability is it’s a threat observation program.”

Left-leaning CBS lined up a whole panel of distinguished former U.S. military officials who agreed to spill their guts about what they know about the UFO “conspiracy.” They admit it’s no conspiracy but they really don’t know much more.

They’re coming clean now because the Pentagon will be delivering a report to Congress full of de-classified material which John Ratcliffe warns is going to shock people. “Frankly, there are a lot more sightings than have been made public,” the former Director of National Intelligence hints. A whole lot more.

All the physicists are in a snit because the evidence proves they’re missing something obvious. That simply “can’t be done,” they insist. The illegal aliens are breaking their precious laws of physics. Aerodynamics experts used to say the same thing about bumblebees, until they looked closer. UFO hunter Lue Elizondo explains.

“Imagine a technology that can do 600-to-700 g-forces, that can fly at 13,000 miles an hour, that can evade radar and that can fly through air and water and possibly space.” He wishes the Air Force could do that. “And oh, by the way, has no obvious signs of propulsion, no wings, no control surfaces and yet still can defy the natural effects of Earth’s gravity. That’s precisely what we’re seeing.”

Elizondo assures the public that they don’t just slap down a UFO label on anything mysterious, they check it out for natural explanations first. Thoroughly. “In some cases there are simple explanations for what people are witnessing. But there are some that, that are not.” To find out, they do the digging.

“We’re not just simply jumping to a conclusion that’s saying, ‘Oh, that’s a UAP out there.’ We’re going through our due diligence.” They really need to know if it is “some sort of new type of cruise missile technology that China has developed? Is it some sort of high-altitude balloon that’s conducting reconnaissance?”

Ultimately, the official admits, “when you have exhausted all those what ifs and you’re still left with the fact that this is in our airspace and it’s real, that’s when it becomes compelling, and that’s when it becomes problematic.” Chris Mellon agrees that if the UFO fleet decides to take on the Air Force we won’t know what hit us. He once held the title of Deputy Assistant Secretary of Defense for Intelligence. He did that for Bill Clinton and George W. Bush and also had a staff job on the Senate Intelligence Committee. He’s nervous.

These vehicles, Mellon reports, “seem to have unlimited loiter time, which we don’t have. We’re limited in terms of altitude, it’s hard to design something that functions well at ground level that can go, 60,000 or 80,000 feet and then drop down to the deck or drop to 20,000 feet. And you know, and it’s like a straight vertical line. In seconds.”

Studying UFO tracks gives the analysts headaches because the acceleration is “far beyond anything” that we’re capable of. “There’s nothing we could build that would be strong enough to endure that amount of force and acceleration.” Unless there isn’t any. Our visitors may have mastered the math that cancels out gravity and inertia with mini-wormholes through the 3.374th dimension.

During the interview, the subject of the previously declassified videos came up. That’s the series of three Pentagon approved videos which document “two U.S. Navy pilots with the USS Nimitz carrier strike group” who “were training about 100 miles southwest of San Diego.” They got lots of footage of a UFO. The pilots claim it “descended 80,000 feet in a matter of only a few seconds.” They couldn’t track the object “because of the speed that it was able to accelerate.”