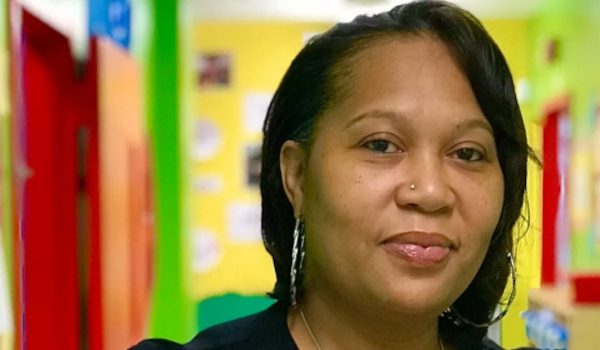 The Maryland woman barricaded in the Mandarin Hotel told police the man she just shot had been “sexually abusing children at the daycare she runs.” She planned to kill herself, out of shame, but not him. She wanted the perverted ex-cop to be alive for trial and sent to prison. That, she figured, would be a whole lot worse.

It’s hard enough to run a daycare operation in the 20’s without your husband molesting the kids. He was supposed to know better, considering he’s a “retired Baltimore City police officer.”

The police report on this incident at the Mandarin Oriental Hotel in Washington, D.C., will be the subject of many a coffee pot conversation this week. It says police responded there “around 7:40 p.m. Thursday night.” That would have been July 21. The caller said a man had been shot and they found him on the eighth floor.

Management clued the cops in that “a fire alarm had gone off in room 853.” Probably from the cordite smoke when 50-year-old Shanteari Weems of Randallstown, Maryland, pulled the trigger. Management thought someone lit a smoke again and “opened the door to that room to check on the alarm.”

Per MPD On July 22, 2022, 50-year-old Shanteari Weems, of Randallstown, MD, was arrested and charged with Assault with Intent to Kill (Gun). pic.twitter.com/TmwRboUQGN

They saw “blood on the wall,” backed out and yelled for help. Officers cautiously approached the door and managed to have a chat with Shanteari through the door. That’s when she told them what happened at her daycare.

The local news won’t say the name of the rat-bleepard because he’s currently considered “the victim.” Police asked Ms. Weems to “exit the room so they could check on the condition of the victim, identified as her husband,” the retired Baltimore cop.

“[Bleep] him, he’s a child molester. If you come in, I’m going to shoot myself.” It took half an hour to get her to come out. She wasn’t shy while communicating with officers, saying exactly what was on her mind. She took her daycare children seriously.

Shut up or I will kill you

Officers relate that the wounded alleged pervert “could be heard through the hotel room door saying he had been shot in the head and leg.” All Ms. Weems had to say back was “Shut the [bleep] up, I will kill you.” That was all cops knew to verify he was in the room and, more importantly, “in need of aid.” That’s when they “forced entry.”

Weems wasn’t that hard to detain and she “surrendered a gun that was in her purse.” When they asked her about other weapons in the room, she assumed the slimewad’s gun was there somewhere, too. That turned up to have been secured in the Hotel safe. All she cared about was the daycare career he ruined along with the kids.

She never meant to kill him she insists, and the police confirm his injuries are “not life-threatening.” He’s not all that happy to hear it. Along with her two shell casings they “recovered handwritten documents within a notebook, the contents of which could be seen in plain view.” It spelled out the whole daycare disaster story.

“I’m going to shoot (the victim), but not kill him.” She was aiming for paralysis, actually. “My only regret is that I didn’t put a bullet in your head.” She also wrote “an apology to her ‘babies,’ stating ‘I didn’t know.‘”

After the police hauled hubby off to the emergency room, Weems told detectives that children and parents, as well as her teachers, at the Lil Kidz Kastle daycare in Owings Mills, told her that “her husband had been molesting children there.” She told police that she did report the allegations of abuse to authorities in Baltimore but he was still walking around loose.

She “didn’t intend to kill her husband.” She “was having thoughts of harming herself.” She couldn’t face the children she had been responsible for, or their parents. Baltimore County police note that “Lil Kidz Kastle will remain closed as the investigation continues to unfold.“