Catlike, Saudi Arabia’s Crown Prince Mohammed bin Salman pounced out of Al Salam Royal Palace on Saturday, for a friendly fist bump with Joe Biden. All the way through Joe’s visit to Jeddah, MBS wore an ear-to-ear grin like he just ate a canary. He really seemed to enjoy the way he intimidated Biden, dismissing murder with a casual wave of his hand, along with any hopes Joe might have had for help easing his gas shortage. Isn’t that problem the result of your own policies? He reminded. If oil is such a bad thing, why is Joe begging him for it? It’s okay to ask, he grinned.

Biden regime officials are breaking the news to liberal media that Joe “won’t be returning to Washington on Saturday with explicit oil production increases.” He had a really friendly visit with Crown Prince Mohammed bin Salman. It just didn’t work out as well as expected.

Joe got to have his sit down with the actual King to save diplomatic face but the King made it crystal clear, MBS is in charge of operations so work with him whether you like it or not.

The Prince is likely responsible for the high profile torture and murder of Washington Post columnist Jamal Khashoggi. Well, sometimes politics do get a little rough. If you want to get picky about it, MBS reminds, Uncle Sam’s hands aren’t clean either. He didn’t think Joe would really want to go around about that particular issue for long.

The real issue is how to keep the Ayatollah from getting and using nukes. Oh, by the way, Vlad’s been dropping by to visit Iran’s drone factory and it looks like they have been checking out some samples.

Team Biden is forced to tell panicky Democrats jonesing for oil that “the expectation is that there will be increases in the months ahead.” Exactly as they scheduled last August. Not a drop more. Prince bin Salman pointed out that “joint international efforts were needed for the recovery of the global economy.” The “unrealistic policies” Biden’s team came up with will only lead to “unprecedented inflation.” That’s Joe Biden’s least favorite word these days. It follows him around like an anchor.

“Adopting unrealistic policies to reduce emissions through the exclusion of the main sources of energy, without taking into consideration the impact of these policies on the social and economic pillars of sustainable development and global supply chains, will lead in the coming years to unprecedented inflation, increased fuel prices, increased unemployment and exasperation of dangerous social and security problems including poverty, famine, escalation of crime, extremism and terrorism,” the Crown Prince grinned. 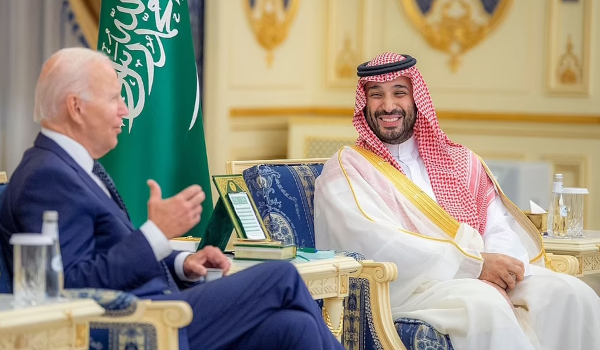 No longer a ‘pariah’

Joe Biden took a stance for the photo op like a boxer prepared to slam his fist into the hand of his adversary like Rocky Balboa.

MBS wore his signature Cheshire grin as he pounced out to meet the American like an acrobatic puma, to deliver a precision tap on Biden’s knuckles for the cameras, before wheeling graciously and indicating Joe should step inside to enjoy their full hospitality. The prince scored more than a few PR points on that exchange.

Later, when it was all over, Biden explained to the press that he really did bring up the Jamal Khashoggi issue. Our spies are convinced Mohammed bin Salman cheerfully “approved the killing.” He told MBS that to his face, too. “Biden later told reporters he raised Khashoggi’s killing directly with bin Salman and said he believed the Crown Prince was responsible.” The de facto ruler of the kingdom just laughed at him.

What he told Biden is “any attempt to impose values on another country was viewed as counterproductive to the relationship.” Don’t come begging for oil and whining about civil rights at the same time. “He then noted that there have been incidents, including the abuse of prisoners by US military personnel at Abu Ghraib prison in Iraq, that reflect poorly on the US.”

Take the killing of Al Jazeera reporter Shireen Abu Akleh, for instance. She was murdered in the West Bank and the Saudi’s have been complaining about it. Sure, the Khashoggi murder is a crime. “While very unfortunate and abhorrent,” it’s also “something that the kingdom took very seriously (and) acted upon in a way commiserate with its position as a responsible country,” a Saudi spokesperson added later.

“These are issues, mistakes that happen in any country, including the US. The Crown Prince pointed out that the US has made its own mistakes and has taken the necessary action to hold those responsible accountable and address these mistakes just as the kingdom has.“