The National Institutes of Health “seems to be playing politics with the Fauci emails” and the “stonewall seems calculated” to do exactly two things, “undermine President Trump and protect WHO and China.” A federal Judge ruled in favor of Judicial Watch and Daily Caller News Foundation on a FOIA request for records from the Department of Health and Human Services. Sort of.

A way to stonewall conservative journalists

Six months ago, Judicial Watch filed one of their numerous requests for public federal government information under the Freedom of Information Act. They were asking for email correspondence and other records from the Department of Health and Human Services including all the ones involving National Institute of Allergies and Infectious Diseases Director Anthony Fauci, and Deputy Director H. Clifford Lane. Their efforts were successful but they got the stonewall treatment at the same time.

On September 22, U.S. District Court Judge Dabney L. Friedrich issued an order for DHHS to start coughing up the records. They admit to holding around 4,200 pages of them. The catch is that they don’t have to turn a single email over for another month yet. They can cherry pick a batch of 300 harmless ones for the only release timed before the election, on October 21.

The stonewall will keep back the bulk of the records expected to shed light on the World Health Organization’s back room dealings with China. The government can trickle out the paperwork in batches of 300 per month. Dr. Anthony Fauci will be looking closely at each and every one before it goes out the door to see what needs to be redacted for “security” reasons. 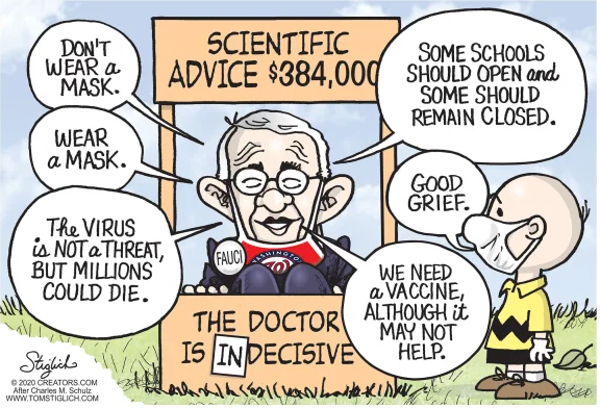 No wonder Americans have lost trust

At the rate the judge ordered, it will take until sometime in 2022 before the last page is turned over. The plaintiffs are understandably disappointed. “People have every right under the law to see the communications between our government agencies (including Dr. Fauci), China and the WHO at the outset of this pandemic that has killed so many Americans and destroyed our economy,” Neil Patel, President of the Daily Caller News Foundation.

“We are happy that Judge Friedrich agreed with our position that the government should not be able to keep this information secret.” He’s just not happy about the stonewall technique. “However, the fact that the document production doesn’t have to start until over six months after our lawful request — and that the production will not finish until 2022, is a sad joke.”

The calculated obstruction of justice is such an obvious insult that as Patel asserts, “it’s amazing people still wonder why the American people have lost trust in our national institutions.” NIH “seems to be playing politics with the Fauci emails,” Judicial Watch President Tom Fitton adds. “The FOIA request at issue here concerns records that are likely to shed light on the China and WHO disinformation campaign on coronavirus — the stonewall seems calculated to undermine President Trump and protect WHO and China.”