In Egypt under the government of President Abdel Fattah el-Sisi, the former Egyptian Defense Minister and Commander-in-Chief Egyptian Armed Forces, who helped lead the overthrow of his predecessor: the Muslim Brotherhood’s Mohamed Morsi, the land of the Pharaohs is building a new capital. To go along with it of course, they are constructing the most massive defense complex in the world to house the military that still more or less runs the country.

Approximately 28 miles east of the current capital of Cairo, the new administrative capital and the largest defense complex in the history of the world are being constructed. Egypt’s military has had a truly massive role in their nation’s politics given that Presidents Mubarak and Morsi were both violently overthrown and the interim government was headed by the military, and the nation is only now returning to some semblance of political normalcy after a decade of instability. So naturally, the needs of the military in the new capital are being placed front and center and the Army will actually profit in multiple ways.

The military’s enormous role in funding the project is further proof of the conflation of the civil and the military in a country ruled by a former army general – Current President Abdel Fattah el-Sisi came to power on the back of a “coup” that removed Mohamed Morsi, Egypt’s first democratically elected president.

And the military is not only “paying” for the project. It will also reap enormous financial benefits from this ambitious endeavour. The ACUD, in which the military has the majority stake, is in charge of selling housing units in the new capital.”

Egypt’s government has some seriously compelling reasons to move, their ministries are spread all over Cairo on either side of the Nile and the traffic snarls are nightmarish. When you consider the fact that the old city was founded in the year 969 AD. The famous Tahrir square where many Government ministries (and revolutions) are centered was built in a time when horses, mules, and camels choked the streets of Cairo, not cars and trucks.

According to reports the absolutely enormous complex that will house the Egyptian Ministry of Defense is set to become the world’s most massive military complex at about 50,500,000 square feet (1,160 acres; 4,690,000 m2) of floor area according to see.news. The complex is referred to as ‘The Octagon’ due to its eight outer ‘nested’ octagonal buildings surrounding two at its hub with the ability to add two more later on. The influences in architecture and landscaping are heavily pharaonic in design as the entire capital is, hearkening back to the glory days of the Egyptian Empire. 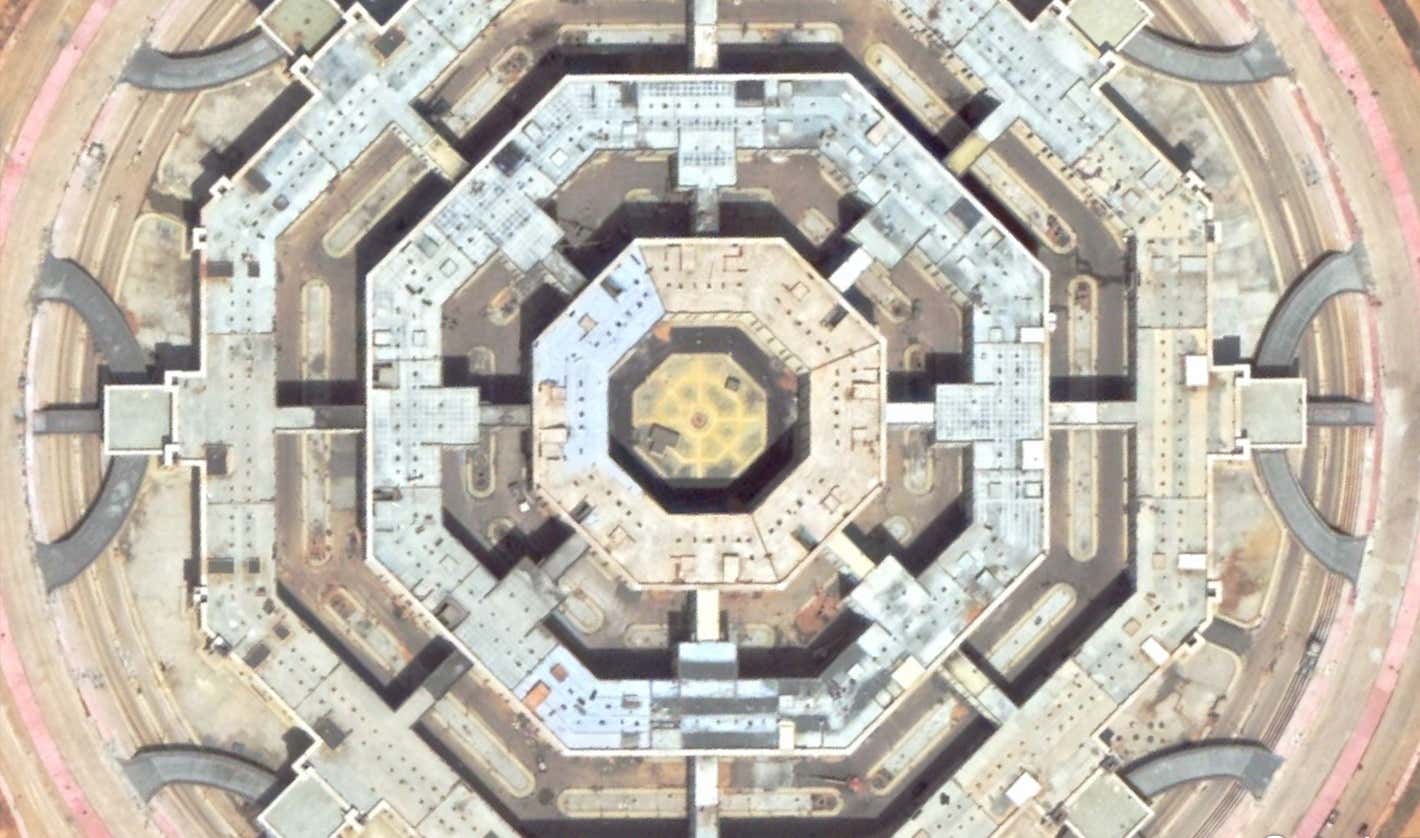 “The hub and spoke design has been implemented with plenty of additional land for other installations and facilities to be added inside its second and third outer rungs, as well. The layout is also designed to organize and reflect the central command apparatus with the outer octagons housing each of the countries four service branches— the Egyptian Army, Egyptian Navy, Egyptian Air Force, and Egyptian Air Defense Forces. So, it’s something of a grand manifestation of the Egyptian Ministry of Defense’s organizational chart as much as it is an architectural statement.”

Mahmoud Gamal, a military affairs writer posted a massive thread to Twitter regarding the complex writing that the “State Strategic Command Complex” includes,

2) Unified Strategic Data Center which stores all the data of the state institutions.

3) Control Center of the Strategic Network, which will control the administrative body of the state.

4) State Utilities Management and Operation Center. This center will control the infrastructure of the state agencies and facilities.

7) Weather Forecast Center which prepares the state and its institutions in case of any natural calamities, disasters.

8) The Strategic Storage Facilities, which will secure a large quantities of the country’s needs of strategic goods & stuff.”

Among the army facilities that will be transferred from Cairo to the State Command Center Complex in the New Capital is the Egyptian Military Academy.

Work is currently undergoing to build a new military academy there equivalent to be double the area of ​​the old one. pic.twitter.com/KU1no0diEo

The Pentagon may need an upgrade or even a replacement. It’s about to get upstaged.