A nuclear grade scandal is rocking the U.S. intelligence community. John Ratcliffe triggered the chain reaction by sending a letter to Senator Lindsey Graham, followed up by a declassified but redacted copy of the evidence. President Trump ripped out all the control rods with a series of tweets and the ensuing explosion is still mushrooming over Washington, D.C., on Wednesday.

All Russia Hoax Scandal information was Declassified by me long ago. Unfortunately for our Country, people have acted very slowly, especially since it is perhaps the biggest political crime in the history of our Country. Act!!!

All the evidence is being revealed

Freshly declassified Central Intelligence Agency documents show evidence that in the summer of 2016, long before the big election day, top U.S. intelligence officials personally briefed Barack Obama that Russia seemed to be “potentially manipulating Democratic presidential candidate Hillary Clinton’s plans to smear Donald Trump as a Russian agent.” The Russians were laughing their rear ends off at the outlandish claims they were feeding to Christopher Steele and amazed he didn’t even question them. That was old news to Barack Obama, he was up to his ears in the scheme already, helping Hillary.

CIA Director John Brennan and other top spies were so spooked about what they learned that they sent a file of all the evidence they collected over to the FBI to start a criminal investigation. They made the mistake of addressing it James Comey and Peter Strzok. The referral quickly disappeared until it finally saw the light of day this week. Comey and Strzok were the ones running the scheme, so there was no need to investigate themselves, they believed. 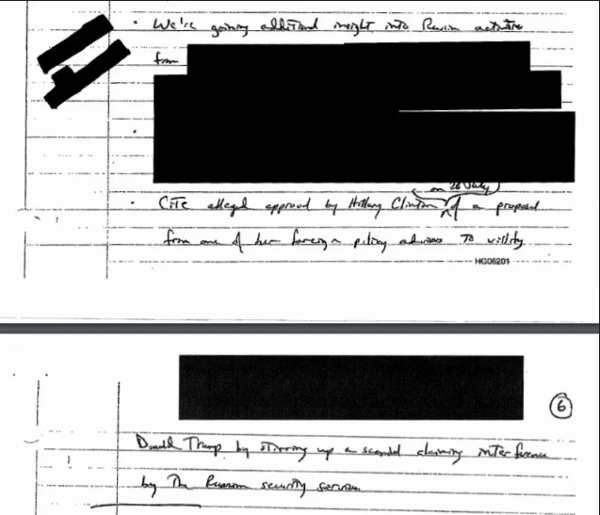 The actual handwritten notes were sent over to congress on Tuesday but the public copy is still covered with magic marker redactions. Between the blacked out parts, the document is clear evidence that “the U.S. intelligence community knew in 2016 that Russian intelligence was actively monitoring and potentially injecting disinformation into Clinton’s anti-Trump collusion narrative.” Brennan’s notes get specific. “We’re getting additional insight into Russian activities from [REDACTED],” Brennan jotted. “Cite alleged approval by Hillary Clinton–on 26 July–of a proposal from one of her foreign policy advisers to villify [sic] Donald Trump by stirring up a scandal claiming interference by the Russian security services.” National Security Adviser Susan Rice, former White House Chief of Staff Denis McDonough, and former DNI James Clapper sat in on that meeting.

BREAKING: An FBI investigator assigned to Mueller's team said the degree of speculating and projecting and theorizing about possible Trump-Russia collusion became so absurd that he & other investigators began referring to the probe as "Collusion Clue" after the mystery boardgame

Redacted but not for long

One of the most interesting revelations from Brennan’s notes is when Obama asked “whether there was any evidence of collaboration between the Trump campaign and Russia.” The response is blacked out. But not for long. Last night, President Donald Trump went on Twitter to declare, “”I have fully authorized the total declassification of any & all documents pertaining to the single greatest political *crime* in American history, the Russia hoax. Likewise, the Hillary Clinton email scandal. No redactions!”

Tom Fitton of Judicial Watch has been trying to get his hands on what the president is about to make public for a long time now. He predicts they will shed a lot of light. “Obama’s infamous January 5, 2017, Oval Office meeting is a key moment in the corrupt effort to smear and spy on President Trump and target General Flynn with a malicious prosecution. Rather than delay and stonewall, it is urgent the FBI, DOJ, ODNI release all records about this malicious, seditious conspiracy.”

Paul Sperry, an expert with the Hoover Institution, notes, “when all the documents are finally declassified, and all the redactions removed from reports, the nation will see that the FBI and CIA not only knew the Russia ‘collusion’ allegations against Trump were a political dirty trick, but that they were in on the trick.” The smoking gun evidence is finally about to be brought to light.

When all the documents are finally declassified, and all the redactions removed from reports, the nation will see that the FBI and CIA not only knew the Russia "collusion" allegations against Trump were a political dirty trick, but that they were in on the trick

Was the CIA used as a weapon too?

More evidence in the declassified criminal referral suggests that the CIA might have been “weaponized” against the president just like the FBI and DOJ were. The document reveals “Per FBI verbal request, CIA provides the below examples of information the CROSSFIRE HURRICANE fusion cell has gleaned to date.” That suggests the CIA had their own file open with the same name as the hit job against Trump. “the Obama administration’s anti-Trump investigation may not have been limited to the FBI but may have included the use of CIA assets and surveillance capabilities raising troubling questions about whether the nation’s top spy service was weaponized against a U.S. political campaign,” The Federalist writes.

They learned of “an exchange [REDACTED] discussing US presidential candidate Hillary Clinton’s approval of a plan concerning US presidential candidate Donald Trump and Russian hackers hampering US elections as a means of distracting the public from her use of private e-mail server.” Despite having evidence of a crime, the CIA “does not have legal authority to police domestic matters,” so “it informed the FBI of the agency’s concerns.”

In spite of the fact that the cover letter notes that “the information within was provided to the FBI ‘for the exclusive use of your Bureau for background, investigative action, or lead purposes, as appropriate,'” no investigation ever happened. “There is no evidence the FBI ever took any action to ensure that Russian knowledge of Clinton’s plans did not lead to infiltration of that campaign’s operation by Russian intelligence agents.” They had no reason to investigate because they were the ones committing the crimes.

Archaic and Barbaric: Cult Goes Viral…Can You See Why?

China Turned Prize Winning Hack into Weapon That They Then Used