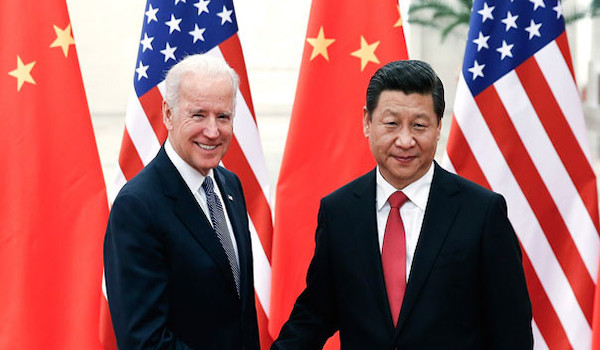 The Chinese government has continued to praise Joe Biden and his policies while asserting it will create a more favorable framework for Sino-U.S. relations. At the same time they’re preparing to take Taiwan by force.

Beijing Biden is weak on China

“President Xi Jinping has had many contacts with Joe Biden, and China and the United States have maintained communication at all levels,” stated Wang Wenbin, spokesman for the Chinese Ministry of Foreign Affairs.

Chinese officials said Biden must change U.S. policies to avoid conflicts as well as develop a relationship of “mutual respect” and “win-win cooperation.” Beijing added, it will not change its own policies because that would violate its national sovereignty.

“They officially call for a replacement of the dollar for international transactions…the Chinese plan was derailed with the election of Donald Trump,” explained Kevin Freeman, financial terrorism expert for the Center for Security Policy. “With Biden, we can expect the Chinese to press forward at an even more rapid pace.”

Experts have pointed out that the U.S. has ramped up foreign borrowing in recent months due to the coronavirus and economic lockdowns, which has made Beijing’s influence even stronger.

President Joe Biden and allies in Asia and the Pacific will have to face the reality of China attempting to take control of Taiwan “not just in three years but three months,” according to the Australian Strategic Policy Institute’s Peter Jennings.

A report by an Australia Defence Department official revealed it was “highly likely” Xi Jinping’s regime would take over Taiwan in 2024 depending on the result of Taiwan’s presidential elections.

The report warned that an amphibious assault on Taiwan’s shores is unlikely but insisted China would use “all means short of war” to achieve its goal.

Mr Jennings told Sky News an amphibious campaign would “lead to war pretty quickly” between China, and the US, Japan, and other key regional allies.

“China will adopt a slower, more cautious strategy than that; taking a step seeing what happens, I think that would involve blockading the straits, it’ll certainly involve coercing businesses not to operate in Taiwan,” he said.

“There’s probably quite a considerable Communist Party 5th column in Taiwan that will rise when Beijing gives it a signal”.

Mr Jennings said any attempts by China to take control in Taiwan will present a significant test for President Biden.

“I think that’s the challenge we’re going to face not just in three years, but in three months,” he said.

“Xi Jinping is very keen to use Biden’s first year to test the president’s resolve on this issue. Xi Jinping has really been ramping the pressure up at all levels in a military sense in an economic and rhetorical sense.”