The ‘Stanislaus County Straight Pride’ event on August 29th in Modesto, CA was proceeding well for about an hour in front of the vacant Modesto Planned Parenthood building until attendees were approached by Antifa “” thugs who accosted and berated them. In another Antifa incited Proud Boys clash in California.

When local Proud Boys in attendance engaged them hand to hand fighting, they were immediately set upon by Modesto Police and Stanislaus County Sheriff’s deputies laying in wait. Two participants in the event were arrested, but none of the Antifa instigators of the brawl were. Both men were charged with misdemeanors. Ford Fisher of News2Share captured the fracas on video.

The Straight Pride Event was organized by local Pro-life activist Don Gurndmann according to the Modesto Bee and was headlined by Rev. Jesse Lee Peterson, conservative radio host and activist who preached a Pro-life, Pro-Heterosexual, Pro-Family, America-First message. 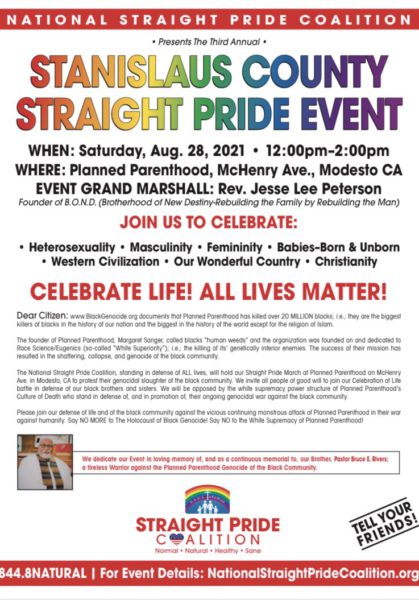 The Modesto Bee, reported that other groups were protesting across the street from eachother simultaneously. “The Central Valley Militia organized a “Patriots Against Pedophilia” rally at the same time as Grundmann’s event. They were joined by members of the California State Militia, as well as the Central Valley Proud Boys.

A California State Militia member who identified himself as Piper, because he smokes a pipe, said they came to be part of the anti-human trafficking protest.

“We heard there might be a disruption, so we came out so there wouldn’t be a problem,” he said. “Our group stayed on the sidewalk and didn’t go to the other side because we don’t brawl.”

The first punch appears to have been thrown by a large man in a white tee shirt and an American flag neck-gaitor who was confronted by a group of black-bloc-clad Antifa thugs. This was little more than a slap-fight for a scant few seconds. But it escalated quickly.

The Antifa group began backpedaling (with one man tripping over a tree root) until the man in white was confronted by another Antifa ‘protestor’ who was quickly knocked out.

As the Antifa line broke in full retreat, an unknown black-bloc-clad Antifa member with bear-mace intervened as multiple fist-fights broke out. The scene turned into a rout as both sides fell back to avoid the spray. The man in white disappears after taking a blast of bear mace directly to the face, he was not among the two men arrested.

The Police and Sheriffs Deputies then immediately descended declaring an unlawful gathering, forming riot lines, and dispersing everyone from the scene, Central and California Militia, Proud Boys, and the unrelated Straight Pride Event across the street.

“A group of #antifa were saved by police after they were beaten & forced to retreat at a violent left vs right protest in Modesto, Calif. Antifa & other left-wing protesters gathered to oppose a “straight pride” event.”

Breaking: A group of #antifa were saved by police after they were beaten & forced to retreat at a violent left vs right protest in Modesto, Calif. Antifa & other left-wing protesters gathered to oppose a "straight pride" event. pic.twitter.com/nZZ9gLkfru