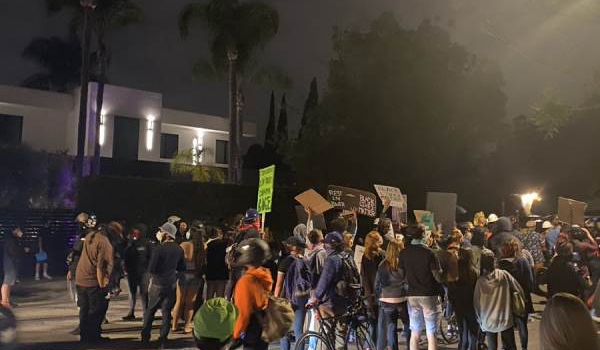 A mob of Black Lives Matter anarchists are getting ready to turn cannibal. They terrorized Beverly Hills elites on Friday night, chanting, “eat the rich.” The riots are a huge dose of karma because they have been well funded by liberal California progressives who already set up bail funds to graciously free the innocent savages before they committed any crimes.

Protestors shouting “eat the rich,” down a street full of mansions in Beverly Hills! #Eattherich pic.twitter.com/WUvnNtrH8G

Antifa cannibals have a craving for some organic free-range liberals. They went stumbling like zombies through the streets of Hollywood Friday night searching for wealthy brains to feast on. Upscale celebrities are getting a little nervous at the mob outside chanting “eat the rich.” If this keeps up, Cher might have to move to Canada after all.

Hollywood actors, producers and the glitterati that follow them around, have been thrilled with all the burning and looting, as long as it was directed at the police. They can burn down all the police stations they want in the name of racial equality. Now that they’re invading Beverly Hills and and want to snack on celebrities, suddenly they start re-thinking those calls to defund the police. They might even head off to a sporting goods store and do the unthinkable, exercise their Second Amendment right and buy a gun. “Eat the rich? Yeah, right, eat some lead.”

American flags didn’t stand a chance. The mob quickly removed all they encountered. Eventually, the police decided to do their job. “The unlawful assembly in the area of Rexford Dr & Carmelita Ave has ended with arrests being made. Protesters have now left the City.” They can go eat the middle-class.

Upscale Hollywood police decided to take drastic action to prevent the cannibals from finding someone wealthy to eat. Subsequent riots will have to comply with social distancing regulations. “To preserve the peace and tranquility of residential neighborhoods, effective tonight and until further notice, no more than 10 people shall gather in an assembly in a public right of way in a residential area between the hours of 9 p.m. and 8 a.m.”

Just to make sure that everyone knows what they mean, “An assembly is defined as any gathering or group of 10 or more people on a public street, sidewalk or other public place if those 10 people have a common purpose or goal.” In other words, groups of 10 or less can eat the rich on one street while another group grazes the next block.

As long as you do it quietly, and with candle light instead of Molotov cocktails, you can gather on any private property you can seize after you eat the owner. “Any assembly that is silent, such as a candlelight vigil, and gatherings on private property are exempt from this emergency order.”

Governor Decides to Take Socialism Into His Own Hands, Signs New Law