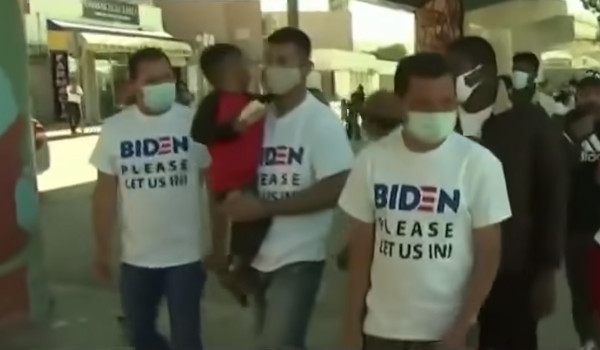 At the California-Mexico border or where the third world meets socialism, large numbers of illegal immigrants were photographed replete in “Biden Please Let Us In!” tee shirts and pre-printed signs. Both printed products appeared to be of moderate quality, suggesting significant funding behind the media stunt.

According to DailyWire, “The photographs were taken on Tuesday on the Mexican side of the border at the San Ysidro crossing port in Tijuana, Baja California state.”

“The president is working to process as many as 25,000 asylum seekers who were forced to wait in Mexico under the Trump administration’s ‘Remain-in-Mexico’ policy under the Migrant Protection Protocol (MPP) program,” Fox News reported.

“Biden has promised to accept more refugees into the country during his time in office and implement more ‘humane’ policies, such as a proposal to pay for the transportation and health care costs of migrant families who were separated at the border under the Trump administration.”

DeCoding the Message From Biden’s Illegal Voter Base

With all due respect to the DailyWire’s Ryan Saavedra who does amazing work, he may have been too charitable to this group. Ryan wrote “A large number of migrants were photographed near California at the U.S.-Mexico border wearing Biden t-shirts that asked that they be let into the U.S.” However, January 21st The GOP Times noted,

People seem to be basing this on Joe Biden’s campaign promise of a ‘100-day moratorium on deportations’. The Hill reported the caravan violently breaching the border fences at El Florida, Guatemala and “failing to comply with immigration and health requirements”. The caravan is expected to reach the southern border within days.

This is bolstered by releases regarding the plan like this one from The Sacramento Bee,

“The bill would allow undocumented immigrants living in the U.S. to apply for temporary legal status. After five years, those immigrants could apply for green cards under Biden’s proposal. To apply, applicants must be physically present in the United State before January 2, 2021.” In other words, “Merit-based” immigration is dead, if you can get here fast enough, it’s a free ride.

“Joe Biden recently announced a plan to give amnesty to an undetermined number of illegal immigrants. It’s a plan that even members of his own party are calling a “recipe for disaster.” Not that they’re concerned about the country, mind you. Just their political careers. Critics of this and any other proposed amnesty bill say blank amnesty/”pathways to citizenship” just encourages illegal immigration. Rewarding people who have been breaking the law just encourages more people to break the law.”

This is truly just a media play, these illegal immigrants aren’t asking permission from the Biden-Harris regime. They already know: They were invited.

Fox News’ Jesse Watters hit the nail on the head “Yeah, I want to know who manufactured the t-shirts maybe I’ll have an investigation on the weekend show but I know this judge the cartels are getting filthy rich.”