In a groundbreaking report, the Associated Press has revealed that many in the various caravans that have brought tens of thousands of illegal immigrants from Haiti as well as Central and South American nations to the United States’ southern border, were coordinating and facilitating their criminal enterprise via social media such as Google’s YouTube, and Facebook owned WhatsApp and Groups. Conversely, both Big-Tech giants have clamped down hard on any right-leaning groups using their platforms to coordinate protests of any kind under the guise of preventing “illegal activity” while tacitly allowing illegal border crossings, planned BLM & Antifa riots among many other criminal acts that align with their leftist ideology. 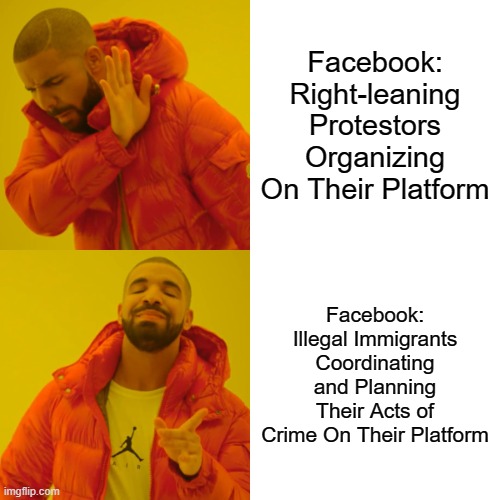 According to The AP report, the sudden spike in Haitian illegal immigrants moving to Ciudad Acuna across the border from Del Rio and penetrating the US Border there,

“It also reflects the power of Facebook, YouTube and platforms like WhatsApp, which migrants use to share information that can get distorted as it speeds through immigrant communities, directing migration flows. That’s especially true for tight-knit groups like the Creole-and-French-speaking Haitians, many of whom left their homeland after its devastating 2010 earthquake and have been living in Latin America, drawn by Brazil and Chile’s once-booming economies.”

Facebook Role In The Illegal Immigrant Caravans Is Undeniable

The debate on whether or not illegal immigration has been facilitated, coordinated and even led by progressive groups via Big-Tech social media platforms with impunity is now officially academic. The cold-hard facts in the light of day have revealed that at least 15% of Haitians received their travel instructions online.

According to The Western Journal, Haitians are being told they can make the journey for on ly about $1,000 US. “Fabricio Jean, who is now in the migrant encampment along the Del Rio International Bridge, and how he was able to arrive in the U.S.

Jean said, citing tips sent to him by his brother through WhatsApp, which is owned by Facebook.” A woman who arrived with two children told AP journalists that her cousin in New Jersey sent her messages via WhatsApp instructing her.

“Wait in Mexico until this month is over. They will pick up everyone under the bridge. After that, they will give me the contact to enter Miami,” her cousin said in the recording.

“Last week, instructions on getting through Mexico, including routes to avoid and specific bus companies to use, were posted by a member of a Facebook group for Haitians in Chile.”

“Good luck and be careful,” a translation of the post said.

According to the reports, Facebook’s content policy bafflingly allows for information about migration to be communicated through its platforms, even if it is information about illegal immigration despite their community standards clearly prohibiting people from “facilitating, organizing, promoting or admitting to certain criminal or harmful activities targeted at people, businesses, property or animals.” Clearly, illegal border crossing in violation of Federal Law isn’t one of the ‘certain’ criminal activities… Imagine that.

John Kerry BUSTED, His Criminal Activities are Now in the Spotlight