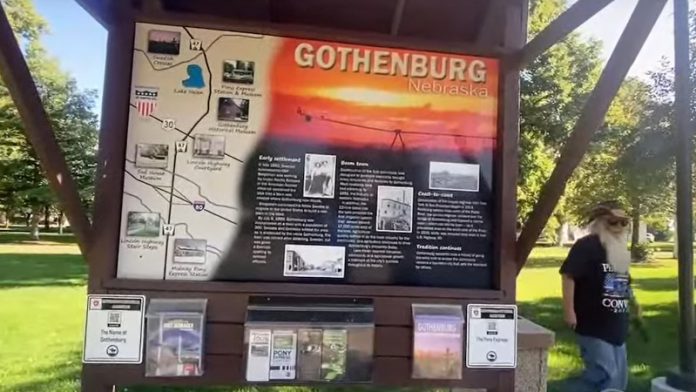 The Grey Wolf Walk for Freedom is literally on the express route to Washington D.C. The Pony Express route. Somewhere along the walk from his campsite in Gothenburg, Nebraska, on the way to the Sam Macchette Station, he passed the 300-miles-on-foot mark. That is a major milestone and his supporters have been marking it with an extra-donation. He’s driving through the barren desert wastelands so he can spend more time walking along with Americans in every village, town and city, which this trek for freedom leads him through.

On Saturday, October 1, Ron “Grey Wolf” Coleman brought his loyal band of YouTube followers on a field trip to the Pony Express Museum in Gothenburg, Nebraska. There’s another one in Missouri and that’s on the agenda when he gets there.

Everybody who was watching live totally enjoyed it. The gracious hostess was full of fascinating facts and local history. 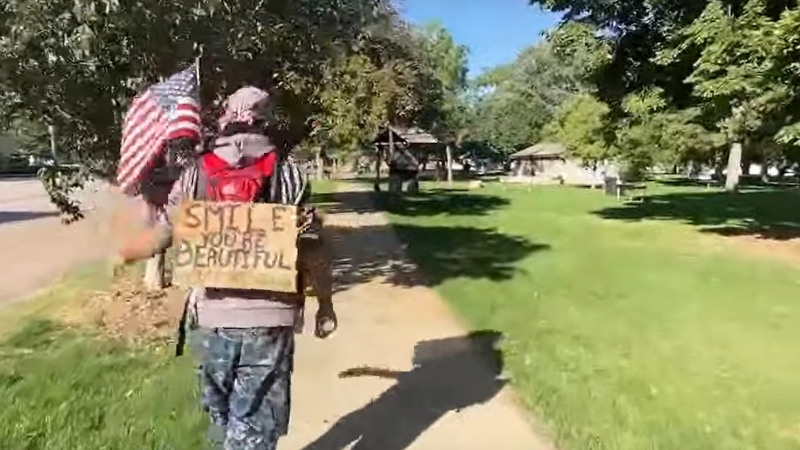 This stop on the Pony Express route was “erected in 1854 on the Oregon Trail and was used as a Fur Trading Post & Ranch House” before the express turned it into a way-station. The restored building now stands dedicated to: “All Pioneers Who Passed This Way, To Win and Hold the West.” Grey Wolf is out to hold our Republic. 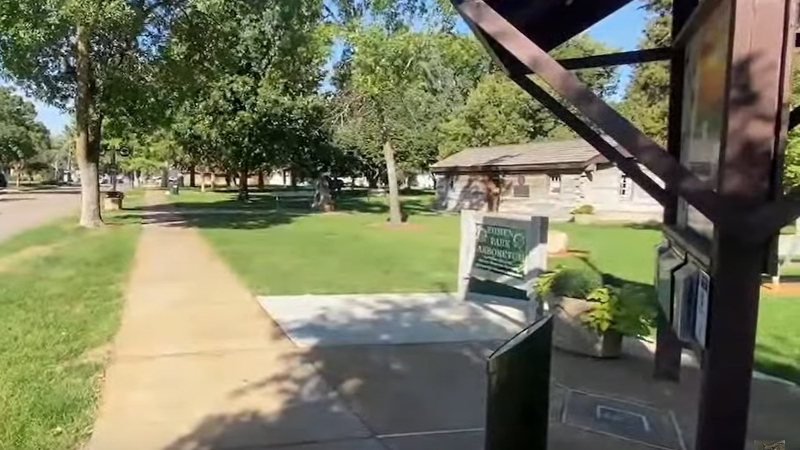 Donations are thankfully on the upswing but we’re a long way from getting him to Washington. Please go to the website and support in any way you can. 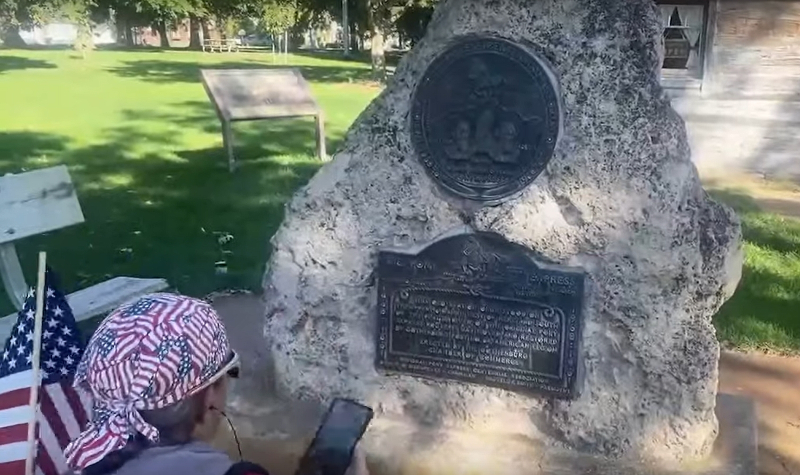 Historic photos and reminders of how harsh life was, along the American frontier, underscore the resilience of Americans who tamed our wild west. Along with the mail came civilization. That meant law and order in some places for the very first time. 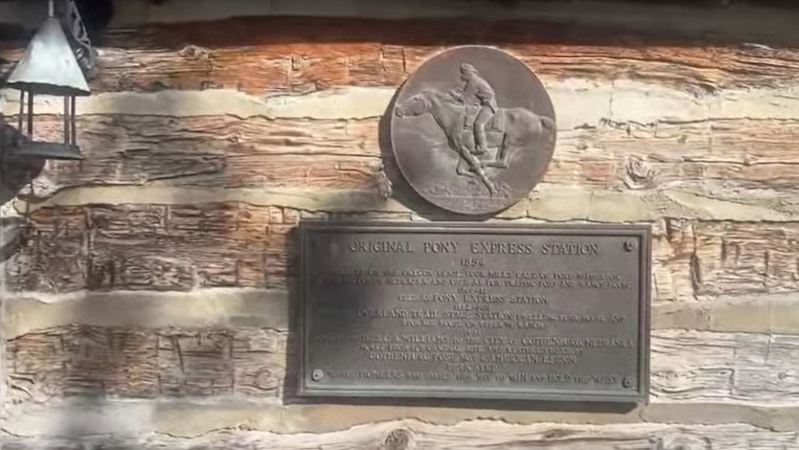 Before the Marshals and Sheriffs came along, America west of Ohio was lawless anarchy. Citizens were glad to see men like Wyatt Earp and Pat Garrett. Most folks don’t realize that Wild Bill Hickok was a Pony Express rider, as well as a frontier lawman. So was Buffalo Bill Cody. They have a great shot of a young Buffalo bill hanging on their wall in Gothenburg.

Walking around the Pony Express museum worked up quite an appetite for Ron and Gypsy. Ron’s nose soon led him to Debs Diner. One of the finest eating establishments known to that part of Nebraska. 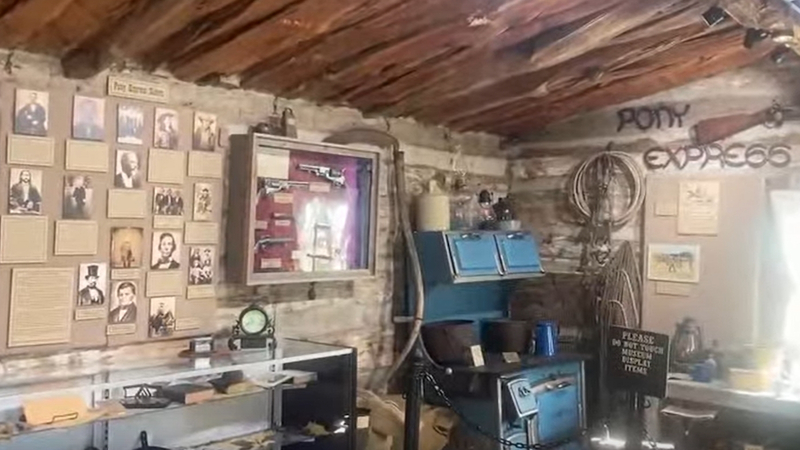 Grey Wolf didn’t know it when he popped in off the sidewalk but that diner, which also features donuts and other bakery items, is ranked #1 of 26 restaurants in Gothenburg. Folks around there really love their coffee. The donuts went in a “Daylight Doughnut” box and looked so good, viewers could smell them through the video screen.

Great things are afoot for Grey Wolf and his team of courageous patriots. They picked up some more local radio station coverage and are expecting a warm reception up ahead on the road a little ways. They are collecting letters for their own Pony Express drive, which followers are familiar with. Details are on the walk page.

Stay tuned to the top of the Grey Wolf Walk page for details. You can follow along on YouTube and other social media sites. Details of those are on the page as well.

American Patriot Steve Spurgeon is a resident of the state in Bellevue, Nebraska. He wrote and donated his song “Wake up in the USA” for Grey Wolf to use. Despite his express written permission, YouTube has been silencing it out, claiming copyright violation issues.

Those are being worked out. In the meantime, Steve’s words should be an inspiration to us all. Especially, after this little visit to the Pony Express station “There’s a cry of freedom sweeping around the world today,” he sings. “Here we have it all. Life and Liberty. Still, we give the dream away. No more can we afford to stand around set inside our ways. Wake up in the USA.“

They’re Using Our Resources for Free, No One Noticed