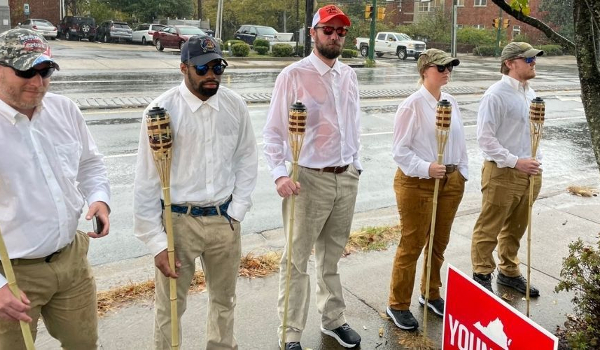 The RINO anti-Trump Lincoln Project was forced to admit responsibility for the tiki torch hoax they set up to photo-bomb Glenn Youngkin’s bus tour. They issued a statement on October 29 accepting the blame, only after they were outed on social media. As originally reported, photos went viral which were supposed to depict “white supremacists” at a Youngkin campaign stop in Charlottesville, Virginia. It turned out that those posing as Nazis were all “members of the Virginia Democrats.”

The Republican candidate has everyone on the left side of politics terrified enough to try pulling such a sneaky hoax, because this race is rapidly turning into a referendum on Joe Biden and his incompetence. They heavily photographed a group of people “outside the Republican gubernatorial candidate’s bus dressed in khakis, white button up shirts, baseball caps, and holding tiki torches.”

It was a complete PR set-up meant to conjure unfavorable images “which were prominently seen during the tragic events that unfolded during a white supremacist rally in the city in 2017.” They left the Klan sheets at home but these young Democrats would have felt right at home in the 1924 Klan bake.

“VA Democrats are apparently so racist that they think black Americans will fall for this obvious stupidity,” Ben Shapiro was quick to tweet, when he found out about the obvious hoax. For added effect, the group “was first spotted outside Youngkin’s election campaign event at a Mexican restaurant.”

As liberal reporter Elizabeth Holmes tapped out, “these men approached @GlennYoungkin’s bus as it pulled up saying what sounded like, ‘We’re all in for Glenn.’ Here they are standing in front of the bus as his campaign event at Guadalajara started.” They were really chanting, “Let’s Go Brandon!”

It didn’t take long for millions of twitter users with way too much time on their hands to start playing amateur detective. “Jewish Deplorable” uncovered “the identity of one of the group, who was revealed to have been the finance director of the Virginia Young Democrats, and part of the Virginia Democrats at George Mason University.”

Hopefully, the conservative school honoring the author of Article 5, which drives the Convention of States efforts, will expel the traitor for his part in the hoax.

Shocked by how rapidly he had been dragged out of the closet, “Camden Layton, the man identified, then locked all his social media as a response.” The next hoax member to be identified was “the sole female member of the group,” Colleen Wachenfeld. “Her twitter originally stated that she is part of the Virginia Democrats.” Then she had it scrubbed.

“Since then, her account has changed appearance many times, including numerous changes to profile photos, and changes to her username and display name.”

Younkin is convinced the hoax was his opponent’s idea. “I think they work for Terry McAuliffe, and I’m sure he sent them. They’ll do anything to win, and he’s doing anything to win, and so he’s paying people to show up and act silly at our rallies.” McAuliffe campaign communications director Jen Goodman appears to have been in on the scheme.

She “promoted the stunt,” saying on Twitter: “This is disgusting and disqualifying.” Political pundit Jack Posobiec pointed that out in a tweet of his own. “BREAKING: Terry McAuliffe campaign officially promoted the debunked tiki torch false flag operation.”

Hanging on to the remaining shreds of plausible deniability, “McAuliffe’s campaign has denied their role in the group’s appearance,” stating: “The Democratic Party of Virginia, along with its coordinated partners and its affiliates, did not have any role in the events that happened outside of the Youngkin campaign bus stop today.”

It turned out to have been an operation by the Lincoln Project who managed to keep the candidate somewhat insulated from the hoax, for now. The official statement they released as they threw themselves on their swords claims “that their intention was to link Youngkin to Trump, and remind voters about the Charlottesville protest in 2017 during which a young woman was killed when she was hit with a car.”